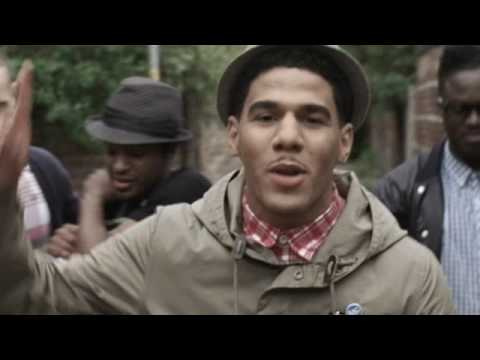 “Where we grew up we could have ended up doing anything, but luckily our parents kept us on the straight and narrow,” says Adio Marchant one of Manchester-born Kid British.

In the group he’s accompanied by school friends James Mayer, Simeon Mclean and producer Sean Mbaya and they are making massive waves on the UK music scene being compared to Eighties greats The Specials and Madness. “It’s great for us to be compared to such icons… It was such a privilege to work with them on tour,” James enthuses then goes on to explain: “I’d hate to be compared with current artists because it means that we’re doing exactly the same thing that everyone else is doing at the moment.”

Originally called The Action Manky, the band are not purposely trying to be different or clever, they’ve emerged and developed from a varied musical background, and describe their music as a combined mix of pop, influenced by modern society with an element of ska. “It’s our own vibe,” they collectively say and especially hate it when the band are pigeon-holed. “We have so many songs in our computers that people haven’t heard yet, so it would be unfair to typecast us,” says Adio. “People look at us and think that we’re just a manufactured band. Like, we’re too good to be true,” [laughs]. James continues: “Because we’re from Manchester, we’re not exactly what people expect.” Simeon expands on this: “There’s a lot throwaway music now. A lot of it has been made for radio and because everyone is chasing the same thing, the music is the same. It’s boring.”

Their debut album is titled It Was This or Football and, as a play on their album title, it will be released in two halves [the first half was released on 20 July 2009, and the second was scheduled to be released in January 2010]. Why the strange title? Adio had a few trials with Premier League team Manchester City, “But I was too lazy,” he says. “I probably would have been a lost cause.”

The group has come a long way from their early days of writing 16 bars over a garage beat. “I think we started out as garage and grime artists because it was the thing to
do; a stereotype,” explains Simeon.

“But that’s like an old chapter. We could go back there, but I think this has been a natural progression for us. We appreciate more music now. I think we have moved on.”

With such talent, it’s hard to believe that these boys still occasionally find it difficult to get the recognition they deserve. Some stations think they’re not ‘urban enough’. Simeon is circumspect: ‘It’s pretty short-sighted isn’t it? Like saying if you’re urban you have to only make a certain type of music. It doesn’t make any sense. Hopefully we can open people’s minds and inspire others. To tell them that it’s cool to make music other than grime or garage.”

The last few years have been a whirlwind; with the group being signed to Mercury, touring with The Specials, performing at summer festivals including V and iTunes Live, topping the polls to be named Manchester’s Best Band, having their single Our House is Dadless named record of the week on the Scott Mills Show and having a vocal fan in DJ Chris Moyles. “It’s been hectic,” says Adio. “It’s been hard work, but we love it.”

“I think winning a Grammy would be my ultimate fantasy,” James says. “Or to perform in Japan and get a fanbase there. That’d be pretty amazing!” Their forward thinking is also reflected in their trendy style with a boyish twist. Good thing too as the boys are now ambassadors of the River Island Presents… T’s For The Trust campaign, along with Alesha Dixon, Pixie Lott and Kelly Rowland.

Here, each celebrity creates their own T-shirt to help raise money to change young lives with profits distributed through The Prince’s Trust across the UK. “We’re quite stylish, or fashion aware if you like, and I think each shirt shows our personalities,” states Adio. “We do have our off days… there was this one time when Sean wore orange jogging bottoms like he was off to do some yard work. Adio is probably the most consistent dresser,” chuckles Simeon.

The T’s For The Trust range is out now; www.riverisland.com