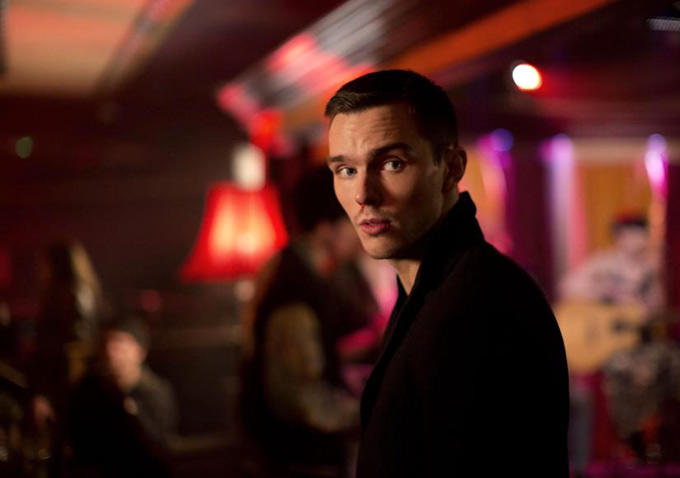 Nicholas Hoult certainly has come a long way from the weird nerd Marcus from ‘About a Boy’. In Kill Your Friends, the book adaptation of John Niven’s dark comedy novel, Hoult just goes to show what a versatile and diverse actor he is becoming.

It’s 1997, the British Music Industry is on a high from the successes of the Britpop culture in the forms of Oasis and Blur. The story revolves around Steven Stelfox (Nicholas Hoult), a 27-year-old A&R man at a British record company, he has lost sight, and any real love of music as his own success and self-importance becomes his number one priority. This aided by the fact that he is only as good as the success of his next signing. The guy is a despicable human being, vile, ambitious and will step over anyone to get what he wants. Hoult’s performance here is outstanding, but it’s just a slight worry that, although the lead we never care what happens to this man or any of the characters we encounter throughout the film. When his only care in the world becomes his obsession of running the A&R department he decides to get more involved. Rumours abound that his overweight coke addicted colleague (James Corden) is set to take over the sought after position he so desperately thinks he deserves he sets to work spiking his drink with as many drugs as possible, once he has passed out we even witness Stelfox urinate on him thinking he is dead.

As the film progresses Stelfox keeps getting overlooked for that all important role and his efforts to get rid of each one of the competition just makes him even more sick, bitter and twisted, he even manages quite cleverly to enlist a detective, who has ambitions of his own, into cutting up a dead body after a night of drug-fuelled debauchery. The script may well be quite weak in places, but the premise of the story is intriguing and not too far off what really used to happen behind the scenes of our Music Industry (that’s coming from 14 years of firsthand experience).  Drug taking is a very large part of every scene and the catalyst of Stelfox’s psychopathic downward spiral as the film delves deeper and deeper into its dark abyss where it loses any control of its comedy which was solidly strong in the first half.

Kill Your Friends had so much promise and for the first half pretty much entertains with its dark cynical comedy, the fact that Hoult stuck his teeth into this role really shines through and without his outstanding performance the viewer would be lost in confusion as the darkness gets all just a little confusing.