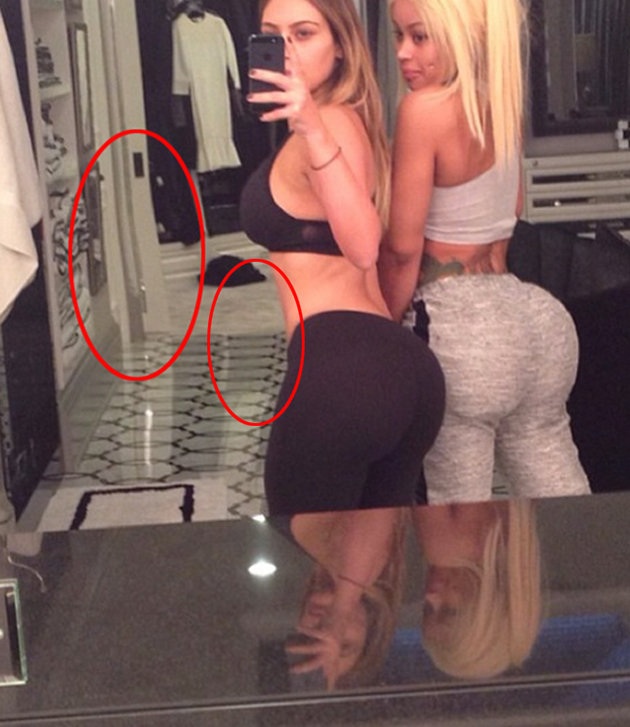 The internet went wild for the Instagram photos of Kim’s post-baby body. One photo is a frontal shot with her friend Blac Chyna with the caption “Getting right for the new year.” The other is a butt selfie. At least, that’s what we thought. Photoshop expert Peeje T. told Radar Online that the photos have been “manipulated.” “In the first pic, which I’ll call the Booty Pic, I have diagrammed with a red line how the door should look if it was a norma, straight-edged door. You can definitely see the gap at the same level of Kim’s chest. This would be caused by using a tool to expand her breasts.” (He really gets scientific there.) “In the second pic, which I’ll call the Stomach Pic, you will notice the door curves out at Kim’s midsection,” Peeje said. This would only happen if she changed her waistline.

“Photoshop! Look at the floor tiles and the curve on the door frame,” wrote piola100. “Unless Home Depot sells bowed doors now, that’s a bad photoshop job,” said oneatom12. She did have defenders though. “So what if it’s photoshop she still the baddest bitch alive,” said _prettypanties.

The Cut chatted about the Insta-butt-scandal, with editorial director Stella Bugbee wondering whether any of this really matters: “I’m guessing everything about that image was Photoshopped! But, I mean … do we even care if it was Photoshopped? Why do we need KK to be ‘authentic’?”
Perez Hilton asks if it was really “Kim’s komputer” that got the real workout, in his post titled This Picture Of Kim Kardashian Will Make You Question Everything About Dat Ass! Decide If You Think She’s Photoshopping Her Selfies HERE!”

Recently Kim been snapped out looking a little fuller figured that in the gym shots. so if you’re not losing those Christmas pounds or baby weight as fast as Kim seems, don’t worry,neither is she.

Last June, Kardashian gave birth to her first child with rapper Kanye West. Since North West took the Internet by storm, mom has gone on the Atkins diet to get back to her pre-baby body. She also has been working out, and is training herself frequently, according to the New York Daily News. This has all lead to Kardashian losing more than 50 pounds as of last month. According to US Weekly, she still plans on losing more weight.
Kim’s people are denying any doctoring or retouching of the photos.