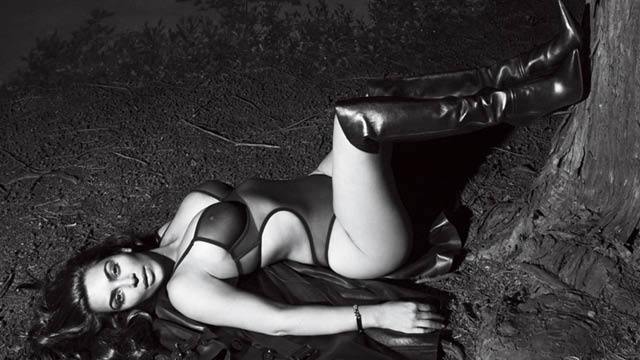 Reality TV Star Kim Kardashian West goes almost nude for GQ magazine, on the cover of the July 2016 ‘Love, Sex and Madness’ edition of the mag.

Posing on the cover, Kim Kardashian goes nude, using only a leather jacket to cover her modesty and once again proving that curvy girls rock. Whether you love or loathe Kim Kardashian West, you simply have to admit, that Kim K has firmly put short and curvy girls on the map.

GET THE LOOK: Selena Bra Set in Black was now only £14.00 from Bluebella

The images captured by Mert & Marcus are sublime and this marks Kim Kardashian West’s first American GQ cover, although she did land British GQ’s cover in 2014

Inside the magazine, Kim poses in body-hugging swimsuits, sheer lingerie, fur pieces and leather boots for some seriously sexy photographs that we just can’t get enough of.

It wasn’t that long ago that Kim Kardashian was taking her first photos in a bathing suit since the birth of her son Saint.

GET THE LOOK: Diabolo Hold Up in Black by Agent Provocateur was now only £15.00

Some of the nude images from the GQ photo shoot, sees Kim Kardashian West topless and bottomless posing on a bed with a white sheet and standing on stairs in a black and white photo respectively.

In the magazine Kim Kardashian West gives writer Caity Weaver unprecedented access and a wide-ranging interview about the special way she drives Kanye crazy, being on team #imwithher, what was really in O.J.’s Louis Vuitton bag (yeah, Kim knows), and making her life her business.

GET THE LOOK: Missguided Cut Out Mesh Back Body £20.00

She’s one part pin-up, one part film-noir femme fatale, and utterly jaw-dropping in this video shot by photographers Mert & Marcus.

To see more visit www.gq.com now and check out this blast from the past photo gallery of Kim Kardashian’s British GQ photoshoot, photographed by Tom Munro.