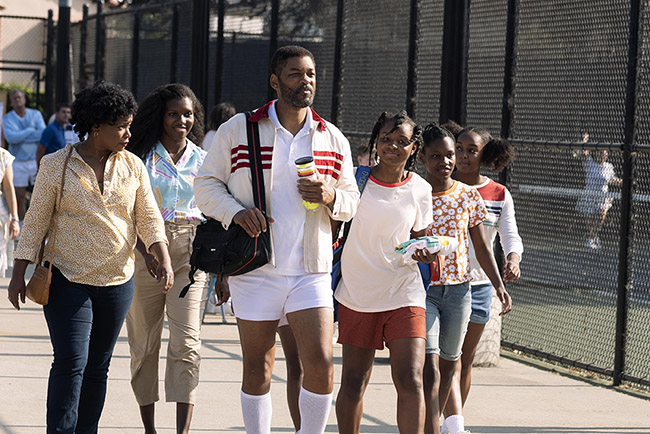 Monsters and Men director Reinaldo Marcus Green returns for this warm-hearted delve into the breakneck tenacity of the Father of iconic Tennis players Venus and Serena Williams, Richard Williams. With Venus and Serena both serving as executive producers, this is a love letter to a father who would never give up on pushing their talents via his own agenda and his own terms.

Will Smith takes on the coveted role of Richard as the story begins with the Williams Family financial struggles. Acting as their tennis coach, he takes the young teenage girls to the public tennis courts almost every day, pushing them to be the best they ever can be. Richards family is his world, he finds himself on more than one occasion taking a beating from the local hoods – and in front of his kids – for simply standing up to the letch who keeps coming on to one of his daughters.

Richard is not always painted in the best light, like a bull in a china shop he forces his way into exclusive Tennis clubs, speaks his mind if he doesn’t agree with world-class trainers and at times almost derails the girls rise to the top. It’s his stubborn determination that keeps the dream alive and the family a loving unit.

Smith is on fire with his performance, walking with a slight hunch, battered from the streets of the ghetto, he melts so effortlessly into the character. It’s hard to see where the actor begins and the character takes over. The whole Williams family unit, especially Demi Singleton and Saniyya Sidney – who plays the young Serena and Venus – have this wholesome family chemistry that just clicks with ease. Although one is offered the chance of a lifetime, the other, while a little jealous doesn’t sit around sulking but takes the initiative to train and push herself while Richard’s focus is elsewhere.

This nourishing family biopic may not be breaking any moulds but it serves up a fireball of love and fortitude without falling into the gooey trap of cheesiness. It’s game set and match to everyone involved.