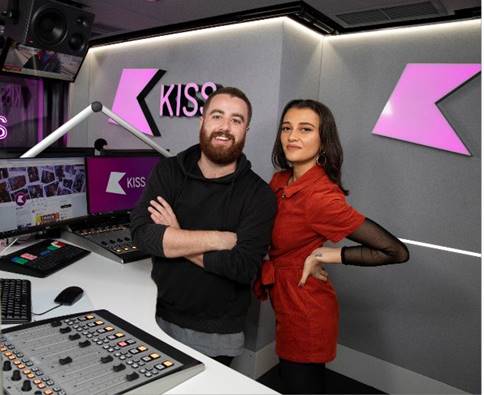 The latest radio signing, Tom and Daisy taking on KissFM Breakfast from Rickie, Melvin and Charlie who lead the show for 10 years.

Last week, I chatted to Tom and Daisy after their show at KissFM’s Studios in London.

D- The early starts are actually going good, I’m in the flow of it now and I’m in an absolute routine. The only struggle I’m finding is on the weekends because I’m waking up early, I also get hungry at certain times now. My lifestyle has switched over completely! A late night for me is now 9PM.

T-  I love it! I still do social things and go out for dinner with friends so I think it’s absolutely brilliant.

S- What did you both listen to when you were younger and does that influence what you play in the mornings?

D- I was always raised very musical but I cannot play anything, so I have more of an appreciation for music.

T- I grew up listening to Kiss, I love music hence why I wanted to do the job I’m doing now. I don’t come from a musical family at all, the only songs that my dad ever played me were ‘Blue Suede Shoes’ not by Elvis but by Cher and the Beyoncé album which he absolutely rinsed, shout out Paul Green.

S- Is there one song that you’re dying to play but slightly embarrassed for people to know you’re a fan of?

T- I bloody love the ‘Pina Colada song’, it’s a bloody good song! It has a story, its romantic. I nearly cry every time I hear that. I love it! also, it’s not actually called the ‘Pina Colada Song’  but everybody knows it as that.

S- You guys have had some awesome celebrity encounters but what has been your favourite?

T- My Liam Payne interview is definitely a favourite, we did life drawing… I did have some clothes on, I wanted to do in fully naked but they wouldn’t let me.

D- Sean Paul was my favourite, he was rocking this crazy big chain and it was unbelievable. He told this story about how he lost his previous one in the ocean and I made a joke about a shark swimming around in the ocean, I said “Grill with Gills’ and it was awful…

S- Is there one person you’re dying to interview?

D- For the breakfast show, I’d love to get Cardi B on here, her energy in the morning would just be incredible. I would want Cardi B to read the travel… maybe even the weather.

T- Cardi B terrifies me! How would I deal with her on air? I’d love to interview Taylor Swift, I’m her biggest fan.

S- What artist do you think will make it big this year?

T- I love a girl called Billie Eilish, she’s so young and her voice is incredible. What stresses me out about Billie is that she is way cooler than ever will be.

D- Grace Carter for me! She’s toured with some amazing people and this is her year to break out.

S- What’s the biggest disaster you’ve ever had while live on air?

S- You’ve been a massive champion of mental health issues and support the campaign to petition for mental health to be treated as equal to physical health in a workplace. Do you have any plans for incorporating mental wellbeing into the new show?

D- I think it’s so important to be open and talk about the things we struggle with and we’re so proud that Kiss is behind the campaign.

T-  We always speak about our problems on and it’s really important to have certain conversations on air.