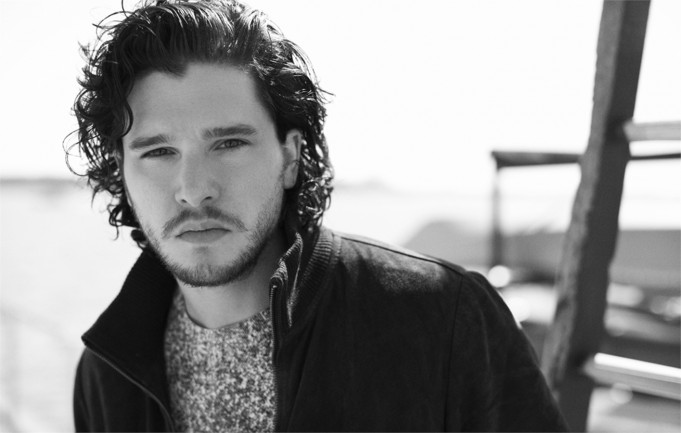 So, Will is an agent gone rogue essentially. He’s a young man, who we learn in the story, has grown up initially with Harry as a kind of father figure. He’s got a pretty rough background; his father in an operation with Harry, years prior to the film starting, probably when he was pretty young -around eight or nine- when his father died. I suppose he’s on a quest to find out how that happened; it’s always been kept secret from him. So there are lots of underlying issues with Harry about who he is, what Harry means to him. Also their background as far as Harry decommissioning him from the service, a few years earlier than our story starts; about three years earlier. So we find him in Russia, gone rogue, he’s obviously  a very talented young agent and he’s been brought in to try and track down Harry because he’s got this prior knowledge to who Harry is and understands him in a way that MI5 Secret Service don’t.

On Spooks the TV series and the spy genre:

I’m coming into this completely fresh to Spooks. I’ve always been aware of Spooks because it’s always been a bastion of British TV and it ran for so long and it was so popular. My brother, for example, was a massive fan of it. I never, for some reason or another, I didn’t watch any of it. I may have seen one episode years ago and enjoyed it, but didn’t see anymore, as it sometimes happens. I was encouraged not to watch too much of it because they wanted to bring a kind of freshness to the movie; to restart in some ways. So I’m learning as I go, I’m learning who Harry is as Peter plays him day by day.

I remember people saying that Spooks was always modern and jumped on the idea of your enemy being someone within your own country and the fact that technology has changed and what’s interesting in our movie is that there’s a wiki-leaks problem, it’s all of that that has come into play now so I think it is very up to date and current, always has been. I think people live in boxes now, community has changed and within communities, especially in London, people can slip through the gaps, especially with technology now and social media. And that’s what we play with, who do you know who’s slipped through the gaps and who’s watching out for members of the general public, is that MI5 and are they doing right by us.

On the reasons to take this role:

One of the major reasons why I really wanted to take this role, not only because it had an exciting script, it had pace, it was fun. But also I’ve spent a lot of time in a fantasy realm or in a very archaic place in a lot of the work I’ve done on screen. So for me, this is a time when I’m still enjoying action sequences. I still enjoy the physical aspect of acting and doing my own stunts and this way I could hold a gun and to read a script and speak dialogue which is a bit more relevant to who I am and who I am in life; it’s quite refreshing.

On working with Peter Firth:

Peter and I met up for dinner and had a chat before we started, it was the first time I’d met him and he was really lovely and he sent me a text saying “welcome to the Spooks family.” We were both very busy before Spooks started, I was doing a different film and came straight onto this from that and it was on the hoof really, every day on the set we would have a chat by the trailers about what exactly is going on in this scene and got to know each other that way, he’s been very helpful. He’s ‘Mr Spooks’ isn’t he? He knows how they’re going to shoot it, the speed which they’re going to shoot it. I was learning from him all the time and learning from him because he’s an incredible older actor; he’s been working for a lot longer than I have and he’s a very, very kind, very warm hearted man.

On filming in London:

Being at the National theatre was really fun actually, my first ever job was at the National, I did a play there so to go back and do some shooting around the roof and everything was strangely nostalgic. I’m amazed it’s not used more, I don’t know what the production company did to be able to film there but they did wonders, it has got such incredible views and it’s such an iconic building. I think you either love the architecture of the National theatre or you hate it and I’m definitely in the first category I absolutely love it, it’s everything London to me so it was really great to be shooting there. I’ve ruined more takes in this film by not doing anything wrong, other than my performance. Every ad coming out at the time, every few minutes I was on buses going round London, my face would be on it so we had to call cut. I think it went from being funny to really not funny quite quickly, especially me. It was a revelation working in London, the last job I had here was Posh, a play at the Royal Court and since then I haven’t done a film here. And that was another really important thing career-wise for me, as I’ve done a lot of stuff that is American based, I was really desperate to do some British drama and Spooks fell into that category and so did another film I did prior to it. I’m a London boy. I’m a proper anglophile really so it’s really lovely to be working from home. Getting up in my own flat, coming to work, going home, cooking myself some food; it’s like a normal job again, strangely. I like the travelling aspect, but it feels like the places we’ve shot, like the National Theatre and the centre of town and Waterloo Bridge. It feels like I’m doing something at home, which I am. It’s really comforting. I’ve got friends who work and live in London who hate it because they feel like they’re work is intruding on their life and that they should be two separate things and they don’t like going home at night to deal with the post and the admin and would like leaving it all behind and working in another country. I like that, but I really have liked working in my own flat, I bought a new flat a year ago and I’ve barely spend a month in it, so it’s great not to be on that mad living out of your suitcase trail for just a little bit. And I’m back on it after this, but it’s all fun.

I think if a director is willing to take minimal risk and let an actor do a stunt that isn’t too dangerous they will always want to try and do it, because everyone moves differently and a really great stuntman will study the way you move and try and fight like you and move like you, but it’s never quite the same as having the actor do it. I think it bugs directors seeing a stuntman do something and knowing it’s not the actor whereas the audience may never know. So I like to do my own stuff, I’m a bit foolhardy with it really, I’m always like “I’ll do that” but then someone steps in and says “no you can’t, its insurance you can’t do that.” There were various things in this I couldn’t do, no only one actually, the falling out of a window onto a table, I did the jump out of the window, it was fun and exciting. I jumped through a glass window for real; I got cut up pretty bad. No, no it was a CGI window that will eventually smash through.

He’s got a very valid reason for what he’s doing and we all know it’s a misguided reason. We all know that he’s one of these fundamentalists’ terrorists. A lot of the time young men get off the train because they feel their country has been unfairly set upon by the West and it’s a fair reason it’s just that in my opinion the violence isn’t any excuse and I think that’s where Quasim’s coming from. And Will is quite a violent man himself actually and I had a big battle with Bharat because I think he wanted Will to be very likeable, that we should feel for him but my feeling of Will is that he shouldn’t be too likeable, he’s been brought in my MI5 because he’s a bit of a thug really. He does things that they want him to do and I think that comes from his background and I wanted him to be quite aggressive and mirror Quasim really, so on both sides you had these young disenfranchised men who were actually doing quite terrible things and it’s sort of who do you root for? Who is in the right? I think it’s like any good drama, it’s shades of grey really.

On working with director Bharat Nalluri:

Bharat is very good at talking you through exactly what’s happening at any one time and where your focus should be. We’ve had long conversations about that because it can get confusing when you’ve got five guns being throwing around at the same time and you’re working at a computer. Then you’ve got all this technical stuff to do on the computer.  Again, I never saw Will as a computer hacker really, it could’ve been an interesting choice to make him that but he’s not that person, Malcolm is or Harry is even better than Will is. Will knows the basics but like I said before he’s the thug really, he’s good with his fists and guns and getting information but he’s not necessarily that computer whiz that we like to think young men in the secret service are nowadays, he’s kind of old school like that.

SPOOKS: THE GREATER GOOD IS AVAILABLE ON BLU-RAY AND DVD ON 28TH SEPTEMBER, COURTESY OF ENTERTAINMENT ONE.