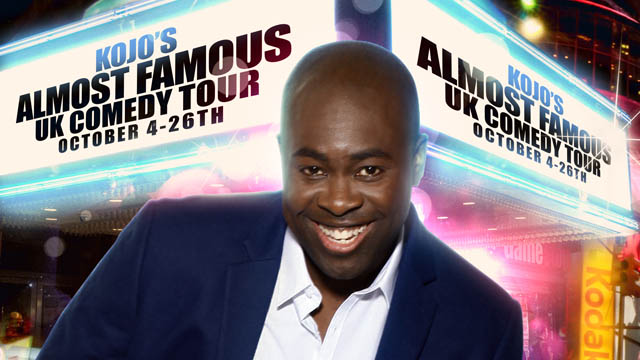 Kojo is undoubtedly one of the most famously un famous comedians in the UK.

He currently wakes up the UK with his radio breakfast show on Capital Xtra but in just 15 years, Kojo has had a national TV show on Cbbc with Reggie Yates, 3 comedy shows on MTV Base including his comedy special The Fresh Prince Of Hackney in 2007, he has sold out his local theatre Hackney Empire on 7 occasions, appeared in movies, The Knot with Noel Clarke & It’s A Lot.

Kojo’s talents have taken him on international soil performing on American TV in NBC’s Last Comic Standing and most recently became the first international comedian on Nick Cannon’s MTV show Wild N Out. Kojo is responsible for the resurgence of urban comedy after the Real McCoy era showcasing comedians at his comedy fun house club for 10 years which also had comedians such as Chris Rock, Dave Chappelle and Kevin Hart grace the stage.

Kojo has written his very first short film Wasteman Diaries and theatre production Above Romance. Having achieved all of the above, he still can’t get guest list at a bloody night club because he’s considered almost famous.. Well that’s about to change…. Get your tickets now: