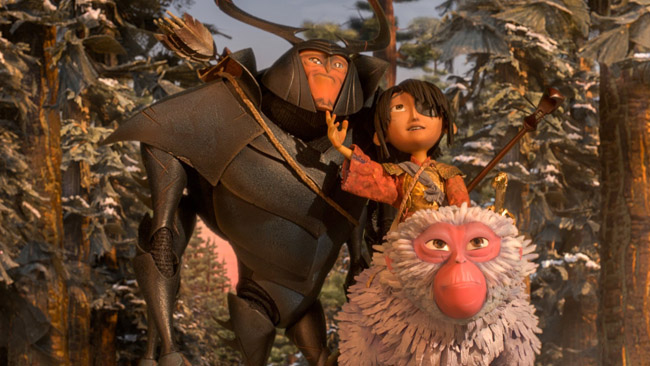 Kubo and the Two Strings is the stop-animated successor of Coraline, Paranorman, and the Boxtrolls. Helmed from talented animator Travis Knight as his directorial debut.

Kubo stands out from the previous filmography of his producing and animating efforts at Laika, through not being horror or a derivative thereof. Kubo is something completely different, with very few animated films to compare to regarding its genre of adventure except for perhaps Dreamworks giant Kung Fu Panda. Kubo and the Two Strings is set in Japan and follows the titular character (voiced by Art Parkinson) on a quest for items worthy of a warrior armed with only his guitar and a talking monkey and beetle for comrades. Kubo isn’t an ordinary young boy, as the set-up shows us, as with his guitar, he can bring origami figures to life, much to the delight of the local village. Kubo never quite finishes telling his tales, though, as he must always rush off at dusk to care for his mother, who warns him he must never stay out after dark. When encouraged to join in local village festivities one evening, involving lanterns to communicate with late relatives and friends, Kubo stays after sundown and without the protection of his mother and the cave, encounters spirits that want him for their own doings. It’s here Kubo’s quest begins, as he must collect all the armour of his late father to defeat these spirits.

It’s a very simple plot, with the objective of our young hero to gain 3 pieces of a puzzle in order to defeat the big villain. It’s actually refreshing to see such a traditional plotline especially within a film that tells of ancient folklore and spirits.

Unexpectedly comes the comedy. Kubo is joined by a monkey (Charlize Theron), once a lucky charm brought to life, who acts as a mother figure throughout his travels. Her sharp and poisoned sarcasm works really well, being relatable for the adults in the crowd but also really bringing this old-fashioned tale into 2016. Beetle (Matthew McConaughey), an anthropomorphic beetle warrior, who is actually a lot more talented than he realises, has no memory from before Kubo and Monkey encounter him. Beetle is the flip side of Monkey: playful, silly, but not patronising or dumbed down. Watching these characters play off one another is like fireworks, however as Beetle and Monkey seeming flirt, we can’t help but feel a slight tinge of uncomfortableness as Kubo might feel, or even any child around adults interacting in that way. It’s something not common in a family film, but gives it an unusual edge that does work for some especially as a redeemable explanation for the behaviour does follow.

What is most delightful about this film is the animation. Although CGI is breathtaking and no doubt stop-motion animation uses computers to help generate its imagery, the use of puppets and real-life models to create these visuals is enormously impressive. This film, in particular, showcases the look of stop-motion, rather than the high precision of some animations replicating live action.

Visuals and the general aesthetic really are the film’s strongest point. Although the plot is a ‘by the numbers’ traditional adventure, the main moral of the story gets lost. Whereas some family films are way too on the nose with their message, it’s a grand shame that Kubo doesn’t clarify enough what it wants to say. Without this, the film loses the longevity and becomes not as prominent in the mind the days following.

Because of this, I see it struggling to compete with the Kung Fu Pandas of the market but hopefully, will be appreciated for the something different that it offers through its style and characters.

Kubo and the Two Strings is out in cinemas September 9.