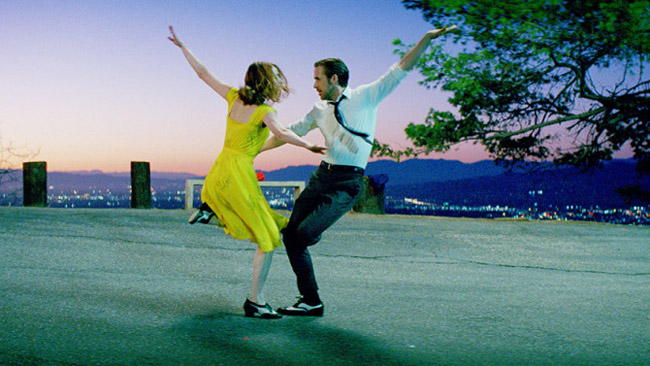 The feel-good days of the Golden age of cinema and Hollywood have been lost for many years to the gluttonous money making franchises the studios churn out at the speed of a juggernaut.

There is no questioning the immense excitement and buzz La La Land is creating amongst not only critics across the world but the awards institutions too.

From the catchy little numbers that make up La La Land’s soundtrack, which is composed and orchestrated by Justin Hurwitz  – who seems to have a formidable working relationship with Director Damien Chazelle starting with their time on the superb Whiplash – including The City of Stars, which will take control of your feet tapping, burrowing deep in the memory for weeks, to the effortless guile and grace our protagonists, Ryan Gosling and Emma Stone, radiate as they sing like angels and glide through each perfectly written, original and produced scene of modern daydream filled romance of LA. Although completely different from Whiplash they both have one common theme, balancing dreams and life’s realities and with each success comes a pitfall.

From the very outset, it’s clear that Director Damien Chazelle is paying homage to all that was once great in Hollywood, a huge song and dance scene with young and beautiful people in the middle of a symbolic traffic filled highway into LA – a scene in which this critic questioned what exactly are we about to witness, leading down a slightly questionable path and probably the weakest of scenes, too much too soon springs to mind – it’s here our star-crossed lovers first encounter each other but with complete disdain for each other as Seb (Gosling) – a pianist who has a deep love of Jazz –  gives Mia (Stone) – a wannabe actress – the finger when she holds up traffic. This, in the good ol’ days, would be known as a meet cute. The pair cross paths twice more before they fall for each, one in which see’s Seb fired from his piano playing job in a restaurant when the monotony of playing ‘elevator music’ pushes him to venture into adding a little Jazz to his routine. The third has Mia attending a party where Seb is part of the entertainment as he plays in an 80’s inspired band on the synth keyboard – not his finest moment.

The pair are complete opposites of each other, chalk and cheese. Seb, who dreams of opening his own classic jazz club, has a sarcastic personality which is ladled with loneliness but doesn’t help himself by being that guy who is simply difficult to get to know. Mia is an optimistic dreamer, who gives as good as she gets. As their love develops we are swept elegantly through the seasons watching the pair blossom in each other’s company, Mia supporting and encouraging his dreams whilst Seb in return encourages her to write her own show. However, this love affair starts to hit a stumbling block when both their respective careers start getting in the way.

It’s no surprise that Gosling’s gliding dance routines and angelic singing seem to come so naturally for him after spending his youth in The Mickey Mouse club alongside Justin Timberlake, it is, however, a surprising splendour to witness Stone, although not the best of voices, take it all in her stride, making weaknesses work for her and endearing herself to the audience. The pair, quite brilliantly sparkles, in each other’s company, both oozing in charm and playful wonder.

Director Damien Chazelle is proving to have that something special in his explosive filmmaking arsenal to create truly incredible films and La La Land is sure to see him go down the same road as Whiplash winning him many awards this season. A simple storyline never going too far in any kind of complications is wonderfully straightforward, a musical love story but with a far from conventional ending, it will break your heart.