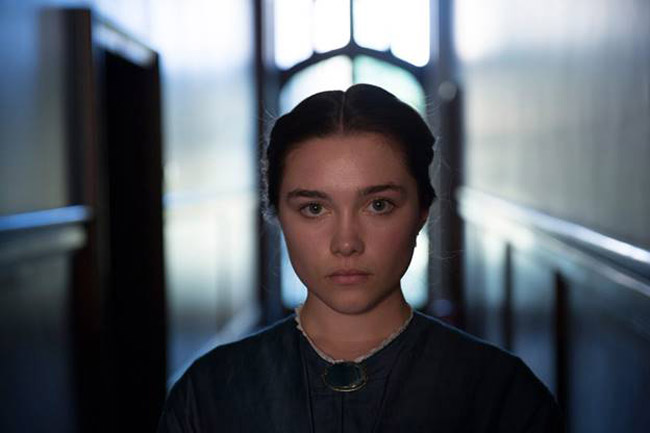 Titles can be deceptive, despite the title here, Lady Macbeth isn’t the wife of Shakespeare’s tyrannical ruler who slowly delves deep into the realms of madness, however, this production is a cunning minx of murderously intoxicating drama, and utterly absorbing filmmaking at its finest.

The true subject of this beguiling period piece is in fact director William Oldroyd and screenwriter Alice Birch’s adaptation of the 1865 Russian novella Lady Macbeth of the Mtsensk, relocating its heart from the cold icy depth’s of Russia and placing it firmly in the oppressive and atmospheric location of Somerset in the 19th Century where it’s brutality and silently foreboding plot sits comfortably in its retelling.

Taking the lead as our antagonist is rising star Florence Pugh as Katherine, a young woman, just married to a husband who refuses any sexual contact, making her stand naked against a wall with her back to him while he pleasures himself but refuses to indulge her of her own desires. Frustrated with the lack of intimacy she expects from her husband she proceeds to alienate herself and mark her authority on the household staff with an air of disdain, especially towards the housemaid Anna, whilst roaming the house to fulfil her boredom.

Even with the heavy laden chauvinistic elements of the time, no female solidarity lays within the skin of Katherine as she witnesses the sexual assault of Anna at the hands of the farm workers. Instead, her own selfishness rises to the surface when she takes an interest in one of the man, in particular, farm hand Sebastian played by Cosmo Jarvis. With her husband away, the devious little mouse will play as she embarks on a passionate affair with Sebastian and flaunts the fact in front of the house staff.  There are facets of D.H. Lawrence’s Lady Chatterley’s Lover embedded in the story but with an original twist of unemotional violence which is greeted with a touch of normality from Pugh’s Katherine.

Within each short sharp scene filled with bleak and lifeless colour almost like a blank canvas just waiting, aching for that splash of impregnating life, each footstep and creaking of a door is magnified as Katherine’s desire turns into cold-blooded murder as the answer to any obstacle that lies in her path to stop her getting exactly what she wants.

Pugh’s depiction of Katherine is nothing but mesmeric, immersing herself into the character with a quiet confidence, emitting a calm demeanour through her deviant and murderous activities. Her ability to keep a stony face in her deliverance is exceptional and wondrously convincing.

Lady Macbeth is embroiled with a quietly feisty spirit which captivates in its simplicity and unsympathetic characters. There is no one character you feel any emotional attachment to and it’s all the better for it in order to keep the audience’s intrigue on its feet.