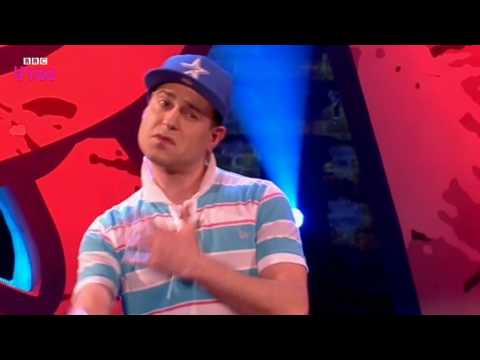 For those of you that missed out on last seasons helping of Lee Nelsons Well Good Show, BBC 3 have commissioned another dose of Simon Brodkin who plays Lee ‘Nelsy’ Nelson a mouthy South London ‘chav’ complete with stereotypes and insults. But is he funny? Well……. yes, somewhat… in a ‘oh, that is so rude…. I shouldn’t laugh… but I will…. kind of way’!

Bouncing from studio malarkey such as ‘dad competitions’ where members of the audience are invited to face tasks such as waxing their stomach to being the first to swallow dry Weetabix to TV skits such as ‘110% Bent’ a pretend documentary on an arrogant, self-indulgent premiership footballer and Dr Bob a gormless, ‘camp’ midwife running amok in an NHS hospital whose rude crude antics will make you both cringe and laugh. The show provides a variety of gags and jokes to keep you amused.

Throughout the filming, Lee entertains the crowd with cheeky jokes and is not short on female admirers with ladies screaming out to have their breasts signed by the ‘cheeky chappy’. ‘Omlette’ Lee Nelson’s ‘larger than life’ sidekick lends a hand as the butt of Nelson’s jokes, sitting for the majority of the show on a sofa stuffing his face and dishing out one-liners. That is of course when he is not parading around in a rather revealing outfit or being ‘peer pressured’ into undergoing stomach-turning tasks such as getting on his hands and knees and sharing dog food in a giant bowl with a dog.

After watching a preview of Series 2 of Lee Nelson’s Well Good Show, it was safe to say I was a little nervous about a face-to-face meeting with the cheeky South London legend. Here’s what he had to say when Flavour met alter ego Lee to talk about everything from schooldays to celebrity crushes. What was it like growing up on your estate?

I’m an estate boy; I’ve been on an estate all my life. I was born on an estate. Well, Mum says it might have been a hatchback. An estate is like a proper community, everyone looks out for everyone. People think cos you live on an estate it must be horrible, but nah, the fella next door’s just had like a conservatory put in and everything. Well, he’s had a sofa put in his garden, but it’s still nice.

We’e introduced to your aunty in the new series. What’s the rest of your family like, do you get on?

You get to meet my Aunty Janet on Series 2 and she’s a legend. I’m not going to spoil it and tell you what happens, but you’re going to love my Aunty Janet. There’s my old man, there’s my mum, and my nan’s on the show and she does a bit of singing and rapping. My old man, he left us actually when we were quite young, which was difficult for the whole family. We had no money when he left because he was the main benefit claimer; but I still got nice memories of my old man. He used to take me places, he used to work at the fair and that’s where I learnt a lot about myself. I learnt to nick things from people and I worked out that the hall of mirrors was quite a good place to do it, as the description people would give the police was a complete waste of time. ‘He was a tall, slim, short fat fella, he went all of them ways.’ And then you was uncatchable.

Schooldays, they were the worst three days of my life. I got in a lot of trouble at school. I was naughty. I remember I chucked a chair out of the window – it was open though. I chucked it out cos a lot of kids were daring me. I didn’t hurt anybody, but Mr Osborne the geography teacher was tied to it; but he was all right.

He’s a legend, he is funny. Series 2, we are coming at you with all sorts: he’s talking to Robbie Savage, getting interviewed by Mark Chapman and Jonathan Pierce (footie commentators).

Do you have any role models? If you were to have a date with one celebrity, who would it be?

After you babe, I’m thinking I like Rihanna, she’s nice. I’d make her feel like she was the only girl in the world over and over; and then I like Amy Childs, she’s nice, I think she’d be up for stuff. I don’t care really. I’d bang pretty much anyone.

What would you put on a personal ad called ‘Lee Nelson’s got Flavour’?

I’d put ‘Legend No 1. Funny’ – can I repeat ‘legend’ again cos that’s quite important. I’m handsome and, like, well-good in bed, can last upwards for four minutes, no questions asked. I’ll make you feel good about yourself innit.

To watch Lee Nelson’s attempts to flip the script on me, delving into everything from my address to where we’d go on our first date, keep it FlavourMag TV and watch this space.