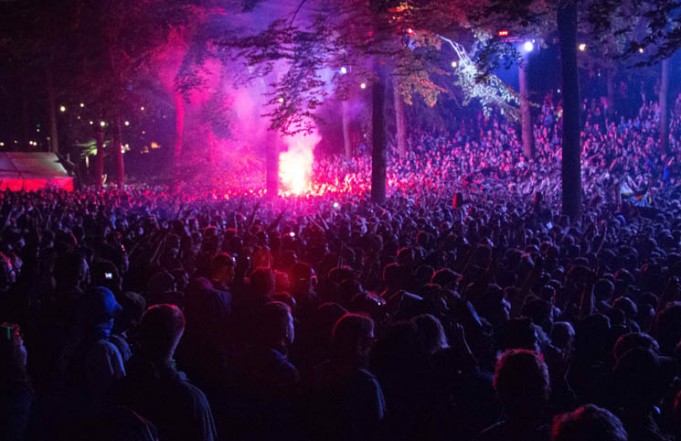 Music Mud and Madness the setting of Leeds Festival. Arriving late on the Friday night with my good friend Seb we had missed the period of settling into the festival vibes during the day and had instead landed right in the middle of the party. Approaching the gates to the festival hearing Blink 182 in the background a massive sense of nostalgia and excitement filled my pores.

GET YOUR TICKETS FOR 2015 HERE

Before we could rush into the main area we needed to meet our contact from Radiator PR a Welsh giant of a man called Aled built like a tank. Walking and talking with him was great especially so as he parted the crowds like Moses. We reached our destination Pink Moon Camping full of Tipi’s.. we found ours threw our stuff down and then made our way into the belly of the beast Leeds Festival.

At this stage the main arena was winding down at this point but the Relentless Stage was going strong. To picture the scene imagine a small valley with trees on either side on the slopes of the hill, in the middle and at the end of the valley was the relentless stage a futuristic looking neon emblem shining bright in the distance. As you walk up to the stage neon lights hit the trees and the people making everyone into raving like spectres you pass two giant Neon looking signs with the words Relentless… almost like an instruction of what’s on the other side.

Click on an image to see the larger version

Me and the mate at this time got speaking to a group of lads and lasses from Manchester we hit the bar and drank in our drinks as well as the scene unfolding before our eyes. After that we decided to go behind stage with our press pass and meet the fellow Journalists. We met some interesting types and saw the Klaxons before bumping into Aled again, so we hit the bar for some Relentless cocktails which involved a lot of Vodka and Passionfruit. We hit the dance floor so hard I lost a part of my shoe!

We made our way back to camp at 5am. Got in the Ice Box of a tent and literally put on every item of clothing I had brought. We woke up bright and early the tent was now boiling in the morning sun and I had so much clothing on I looked like the Michellin man. Hit the showers, munched some food and then the day was given to exploring the surroundings of which we hadn’t seen at night. We walked into the arena and then the guest area we met up with the PR team and made further introductions.

It was raining on and off all day so the ground was muddy (typical British festival has to involve Mud) We saw an unfortunate guy tied up, blind folded and launched down a severely steep muddy hill with a mud puddle the size of a tar pit. Felt bad for the guy but it was time for the main arena again.

Main stage Queens of the Stone Age Came out. They dropped the track Go With The Flow… felt good man! My favourite band of the festival and they kind of summed up my own personal festival experience going with the flow. I mean we had turned up late to a festival we had met new people to watch bands many of whom we had not heard of or didn’t know much about before the festival. We had no idea what to expect and because of that this weekend was a bag full of surprises. Queens of the Stone Age played No One Knows which got the crowd riled up all right. I don’t think I have ever heard a band live that sounds hundred percent like their records.. they had an impeccable level of perfection to their art.

Click on an image to see the larger version

After QOTSA we decided to switch up the vibes a bit and go to the 1xtra stage to listen to the one and only Giggs. That’s what’s great about a festival like Leeds the variety from Rock to Hip Hop in a few metres walk. Was interesting listening to Giggs a London artist rapping and then a multitude of Northern voices rapping along to his lyrics. He certainly has a huge appeal all over the UK as does he have a big female fan base was my favourite tent for that very reason. Me and Seb had our snapback caps on should be renamed snatchbacks for the amount of snatching back your hat from girls. Giggs’s powerful deep voice filled the tents and everyone tuned in to the same low frequency its moments like that when your in a crowd and you feel one with it.

After Giggs we decided to shoot off the Relentless stage again. Netsky was the head-liner we saw him and his mass entourage behind the stage. They looked like they were hyped enjoying the festival. Netsky performance was a master piece, teasing us with the drops only giving us so much then delivering the drop full hit. Fellow DJ and friend Wilkinson even turned up for an impromptu performance of Afterglow with Becky Hill which threw the crowd into a frenzy. The light show was incredible in the forest making it look like a funky haunted house at times. It was freezing cold temperature wise but everyone was in vests and bikinis. I think the key here was to not stop dancing which wasn’t hard when you had a buffet of beautiful tunes.

It was back to the tent at 5am then rinse and repeat our morning schedule. We saw our last band of the Festival The Hives whose front man Pelle Almqvist whose very much Swedish but speaks on stage like a Preacher from the South. He was sweating out charisma as well being genuinely hilarious, declaring he wouldn’t stop playing until people said he was the best band of the festival. He then ordered everyone in the crowd to sit down for the massive hit that was tick tick boom. When the chorus broke in everyone leapt to their feet like the floor was on fire.

The festival wound up with DJ Fresh performing until 3am on the Relentless Stage which was a fitting end to an incredible weekend. DJ Fresh himself even took to twitter afterwards to express how much he enjoyed is, stating:

Leeds @relentlessdrink that was one of the most special sets I’ve ever played. Thankyou so much. I wish we could have carried on forever! Xx

After this I had to head back to London unfortunately… Jumped on the shuttle bus, got on the train, sifted through my memories of the festival and then wrote this little story.

GET YOUR TICKETS FOR 2015 HERE