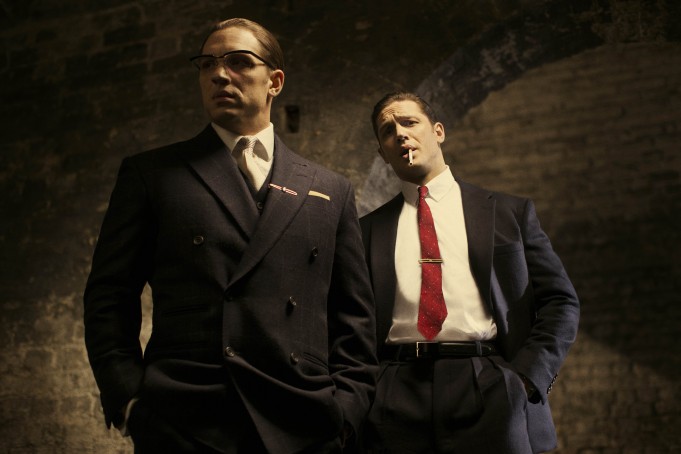 The story of the notorious East London gangsters, Ronnie and Reggie Kray, may have been covered many times both on TV and in Film, but their history is one we constantly show a major interest in.

There is just something about your British Gangster lifestyle that always appeals and Legend is no different. Starting off the film with Ronnie and Reggie, both played by Tom Hardy, Already in the height of their fame, Ronnie in a mental institute and Reggie building on their nightclub empire. In order to get Ronnie out of the mental institute, mental health professional has to give him the all clear, reluctantly even though Ronnie is clinically insane Reggie gets one of his henchmen to “persuade” the doctor to give him the all clear. At this point, we don’t see any violence but from the tone of language used we know it’s only a matter of time.

Legend certainly differs massively from the 1990 story of The Krays, who were played by Gary and Martin Kemp. Whilst the 90’s version went quite deep into their background and felt quite dark, atmospheric and sinister, Legend has an air of comedy and an all round more bubbling and upbeat, brighter feel to it. Ronnie, even though completely mental, has the best one liner’s and these emerge mostly when he is extremely blunt and forthcoming about his love for boys. It’ll have you proper sniggering. One of the best scenes for this is when he first meets Francis, Reggie’s love of his life. The first line he utters to her is he likes boys; Hardy nails the deadpan face with an air of insanity thrown in which just adds to the hilarity of the situation.

Violence, Oh yes there is violence, but thankfully the film isn’t overrun with it. When the blood fest fights begin they are over pretty quickly and you can feel and hear every last punch, you’ll find yourself winching. Surprisingly there are even a few touching moments too. When Reggie gets out of jail and takes his beloved Francis to one of his clubs and see’s Ronnie has run it into the ground a heated discussion between the two erupts.  Ronnie proceeds to insult Francis and a bloody fight breaks out between the pair but the end of the fight see’s them both on the floor, after Reggie has smashed Ronnie over the head with a bottle, hugging and showing the love they have for each other. With only having approximately 10 weeks to film and no CGI facilities, the cut’s between Hardy’s double role as the Kray twins is virtually undetectable. Hardy has also admitted that playing a double role has got to be one of the hardest things he has ever undertaken but we think his performance as a suave, smooth and debonair Reggie and the completely insane Ronnie is flawless, even though his Ronnie was our favourite role. The only criticism I have to give this is Emily Browning’s depiction of Francis is just a bit mediocre and the film’s running time of just over two hours is just a bit too long.

Overall, Legend is funny, touching and a breath of fresh air to a story told over and over again. Tom Hardy is pure genius.