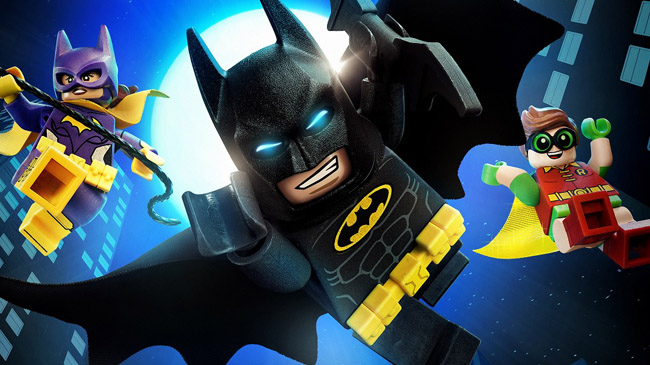 The follow up the plastic phenomenon that was The Lego Movie arrives on DVD this week.  Can the ever-serious Lego Batman deliver the laughs again?

How times change.  When The Lego Batman Movie swooped into cinemas at the start of the year, everybody had a downer on DC movies – and who could blame them after Bats V Supes and Suicide Squad?  It took a stack of plastic figures and bricks to show how it could – and should – be done.

Now the self-styled and self-important plastic crime fighter arrives on DVD.  The arrival of Wonder Woman may have turned the tide for DC, but that doesn’t prevent The Lego Batman Movie from still being fast, frantic and fantastic fun.  Batman (the gravelly voice of Will Arnett) just loves his job, but now it looks like Gotham City doesn’t need him.  The Joker (voiced by Zach Galifianakis) feels under-valued as his adversary so, along with all his dubious cohorts, he turns himself in.  There’s no crime on the streets.  And no crime means no Batman.  As if to rub it in, the city has a new Commissioner Gordon, this time Barbara (voiced by Rosario Dawson), who has vowed to keep the city crime-free.  If Batman is going to keep his job, he’s going to have to work with her and others to do it.  That’ll be a first ……

We’re never allowed to forget the Batman/Superman rivalry that fuelled one of DC’s misadventures last year.  In fact, Superman – sorry, Lego Superman – puts in an appearance, accompanied by the strains of the John Williams score from his first big screen outing.  When Batman rings the doorbell at the Fortress Of Solitude, that’s what he hears.  Just one of a zillion instances of the jokes and non-stop lightning-fast irreverence on offer.  The film only pauses occasionally for breath, and the audience hardly gets a chance.

Here’s a few more.  The soundtrack echoes the theme from the Batman TV series of the 60s and we’re even given a glimpse of what is now a favourite clip on YouTube – a dancing Adam West, in full Bat Costume.  In the long list of villains that The Joker calls on to work with him, there’s what they call British robots.  They’re Daleks – and all they say is “exterminate!”  You wouldn’t expect anything less.  And the password for the Bat Cave is “Iron Man sucks!”  Yep, Batman/Bruce Wayne is no lover of any other superheroes, wherever they come from.

Nothing is sacred in this alternative Bat Universe.  The film starts with a black screen – because, as the voiceover from the diminutive Caped Crusader points out, all important movies start with one.  He takes a dig or two at all the familiar logos that pass in front of our eyes and finishes with an important fact.  He has nine abs.  You always wanted to know that, didn’t you?

The whole superhero genre is sent up something rotten, but joyously, affectionately and, most importantly for its many fans, knowledgeably.  There’s a real sense of a team of Bat Geeks beavering away in the background, packing it full of references and gags that Bat Fans will most certainly get.  Superhero fans will get even more of them, especially the ones at the expense of Superman and Suicide Squad.  Those who aren’t devotees won’t pick up on as many, but what they can’t fail to do is laugh.  A lot.  Because this is a wickedly funny film and entertaining ride.  To use a word that may have cropped up somewhere in another film, it’s awesome!