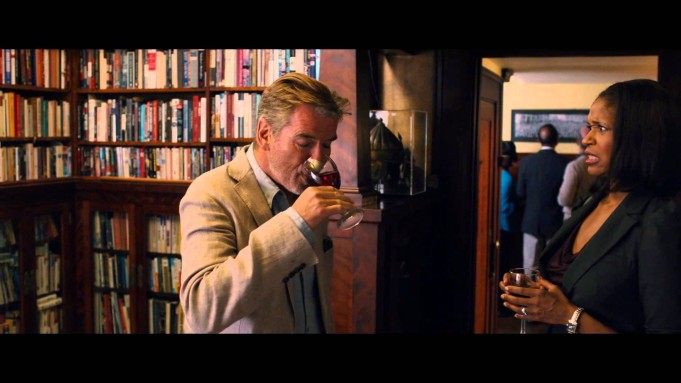 What do you get when you put together an aging lothario and two very sexy and beautiful young women? One cute, complicated and touching romantic comedy.

Richard (Pierce Brosnan), a very good looking University professor teaching the romantics such as Keats and Byron to his students in a very English setting but when he meets the much younger Kate (Jessica Alba) in one of his lectures his life changes forever. Brought up by his extremely promiscuous father Gordon (Malcolm McDowell) there was only ever going to be one outlook for Richard, to follow in his footsteps but when Kate announces she is pregnant, Richard re-evaluates his life and decides to move to LA to be with her and bring up their son. OK so you can probably guess how this is going to pan out from here as most American rom com’s seem to follow the same formula but every now and again these hit the right spot, a bit like a big fluffy cuddle from your favourite teddy bear.

After a few years of married life Richard’s life hits a disastrous point, Kate leaves Richard for a younger man in Brian (Ben Mackenzie), who’s character is very much different from what you might have seen in Gotham. Mackenzie plays a bit of a slightly brainless wet blanket. He has some of the funnier lines too as we witness him try to take on an English accent and his affection for Kate’s ex-husband shines through.

Working at a college where the students seem less than interested, an impending immigration deportation hearing and then being arrested for drunk driving after having a few too many sips of wine while on medication she’s his life hits rock bottom. Enter Olivia (Selma Hayek), Kate’s older fiery half sister, to help Richard take care of his son Jake (Duncan Joiner) for a few days. Yes, you guessed it the pair fall madly in love with each other and when Kate finds out she refuses to help him and he has to reluctantly fly back to England.

The most charming parts of this story come at the very beginning and towards the end, with Richard narrating the whole sorry saga to his son which then becomes evident why he has to tell his son he messed up.  Littered with swearing and very open conversations of a sexual nature in front of the young boy. This, in turn, quite hilariously comes out of the mouth of this child at the most embarrassing of moments.

Lessons in Love is your predictable and formulaic romantic comedy, but it has a certain air of charm which you can just switch off and enjoy it for what it is, a feel good comedy.

LESSONS IN LOVE is released in cinemas across the UK from 25th September 2015.