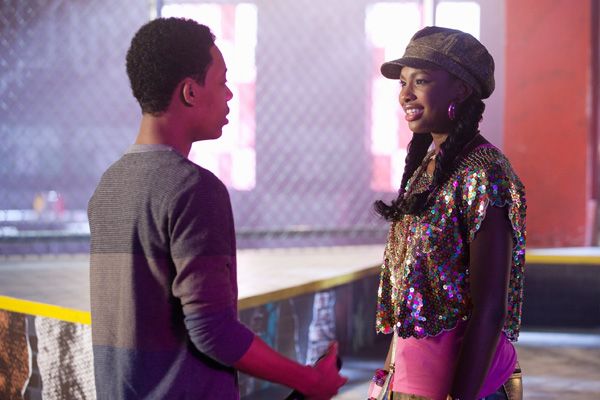 They brought you the likes of High School Musical, Camp Rock and Lemonade Mouth, now Disney are about to do it again! This time with their new highly anticipated, musical movie ‘Let It Shine’. An inspiring film Starring Tyler James (Everybody Hates Chris), Coco Jones (Hollywood Records) and Trevor Jackson (Eureka). Set in Atlanta City, the land of Hip-Hop, Gospel and Rap, Disney puts a modern day spin on Shakespeare’s play ‘Cyrano De Bergerac’. The movie follows the lives of three teenage aspiring artists, Cyrus, Roxie and Kris as they learn how important it is to stay true to themselves, but not without a few hurdles along the way to challenge their friendships! We catch up with Cast members Coco and Trevor…

So how are you feeling about the debut screening for ‘Let it Shine’?
Coco: This is my first big time movie so I’m kind of nervous, but I really want for this movie to inspire everybody and for everyone to enjoy it! It really is an awesome movie. I’m so excited for you guys to see it!

Did you find it easy to relate to your characters?
Coco: Right at the beginning of the movie, my character Roxie is very insecure, she doesn’t have a say in her career. She does and sings what she’s told, she is a real people pleaser, and although she is not happy, she doesn’t stand up for herself or speak her mind! Once she finds herself later in the movie I feel like that is when me and Roxie really come together as one person, when she finds a confident mindset, realising she is a better person being herself than someone else. Trevor: I relate to Kris in the sense that he is very ambitious and he goes after what he wants. We both like to be the life and soul of the party but I wouldn’t say I’m anywhere near as cocky and arrogant as he is!

What was the best bit about working on this movie?

Coco: It was all really great, because we had such a talented cast and director (Paul Hoen) to share the experience with. They were always willing to teach us and help us to become better actors.

Trevor: Meeting such talented people and becoming a family! We learned so much. Everyone came from different backgrounds and bought something special to the movie.

You both have a musical background, Tell me a bit about the music we can expect throughout the film and the soundtrack?
Coco: The music in ‘Let it Shine’ is very current and very relatable! It sounds like something you would listen to on the radio right now! There are elements of hip-hop and Gospel, which I think are very original. We worked with some top of the line producers and my brother and I even got to collaborate on the song ‘That’s what I said’, so I even got to write a little on that track, which was great. You’re both still quite young, like the characters in the film, when did you realise you wanted to pursue a career in entertainment?
Coco: I knew when I did my first big competition for Disney called ‘Next Big Thing’. That was my first time on Disney Channel, I was just 11! I was pretty sure from that point on.

Trevor: The turning point for me was my first tap-dancing performance I looked out and saw all these people smiling and laughing whilst I was doing something I loved!

Now you have both tried your hand at singing and acting, If you both had to choose one talent to pursue out of the two which would it be?
Trevor: It would be singing only because when you sing it’s personal, you can really give a piece of you when your singing. But I do love both.

Coco: I agree with Trevor, I love both but I’ve been singing a lot longer than I have been acting. But I love the challenge of being a new actress, learning new tips and trying to become better at my craft.

What do you want the viewers to take away from this film?:
Trevor: I think this film has a really great Message! It’s about being who you really are. People have to find out what they want and what they love to do. Once you find out who you are, you can just go with it and aim for the stars!! You should stand up for what you believe in.