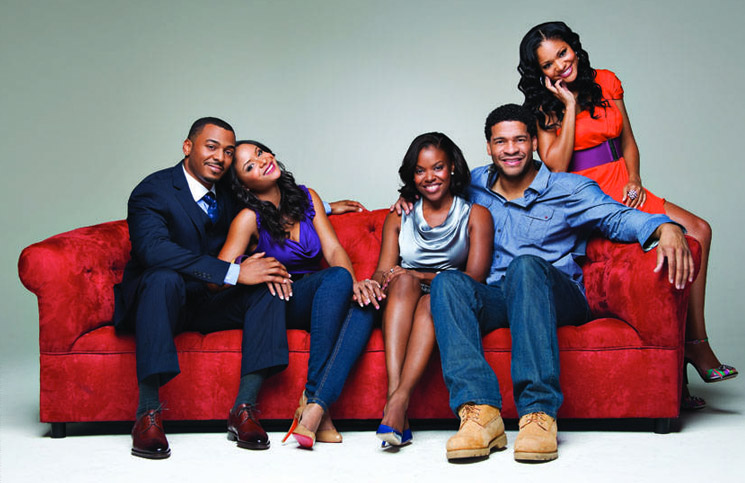 For those of you late to the party, season 4 of Let’s Stay Together has hit our screens. To bring you all up to speed, Let’s Stay Together is an American Romantic Comedy TV series on BET International centred on five main characters and the trials and tribulations of their rollercoaster relationships.

Don’t let that fool you into thinking this is some lovey dovey soppy series though. The rolling theme for most of the female characters is they are strong, successful women that are not prepared to be a walkover or let any man run their lives for them. Let’s take a closer look at what our cast has to offer. Stacy Lawrence (Nadine Ellis)
Stacy is a smart, successful and conservative paediatrician, married to Charles (who was previously a contractor she had hired to remodel her kitchen, so she obviously likes a bit of rough), what does make her loveable is the fact she is slightly irrational from time to time. Married life is certainly tough for the Whitmore’s but Stacy makes it her goal to know how to please her man.

Nadine Ellis, who plays Stacy, started of her life as a dancer and was in fact one of the founding members of the Pussycat Dolls and was ever present for the best part of 10 years. She first had her big break on the big screen in a movie called Idlewild and has since gone on to star in films such as Hairspray and Live Free or Die Hard. Charles Whitmore (Bert Belasco)
Charles is not only Stacy’s husband (well only just after he left her at the altar once, boooo hiss) but also has big ambitions for his life. He tries and shows Stacy kindness every day, and this makes their relationship fun, sexy and intense.

Bert Belasco came to this acting lark later in life and only got his theatre degree in 2005. Belasco had only been in a couple of TV Movies before he finally landed his big break in Let’s Stay Together. Tasha Lawrence-Woodson (Joyful Drake)
Tasha is Stacy’s super fabulous, sassy and incredible stylish younger sister. Married to Jamal, they act like an old married couple instead of a young couple in the prime of their lives. Not only is Tasha a classy and super ambitious young women, she’s also the mother of twins and the owner of a baby boutique. This woman is the epitome of a strong successful woman, showing women everywhere if you want it hard enough you can have it all. She makes you want to say “you go girl”.

Joyful Drake (yes that is her name), has been a regular familiar face on American prime time television but she has also had some roles on the big screen too in films such as Get Him To The Greek, Phat Girlz and Beauty Shop. She’s certainly the sassy women of the moment. Kita Whitmore (Erica Hubbard)
Kita is Charles younger sister, you would never have guessed it as they are nothing alike, and in fact they are complete opposites. She’s a self assured women who isn’t scared of saying what is on her mind and lives her life her way. She also likes to explore many avenues, she’s worked at the DMV, starred in a reality TV show, became a bartender and now, in her spare time has decided to fight crime and become a policewomen. She certainly isn’t bored of her life.

Erica Hubbard doesn’t really need to stretch her acting ability too much in this role. She’s had a pretty successful life already. She was a childhood voiceover actress and model, Has hosted her own local TV programme been in films such as Save The Last Dance and also has time for her own non profit charity The Erica Hubbard Foundation which is dedicated to inspiring and motivating the young. Phew, I’m knackered just actually reading about her life. Jamal Woodson (RonReaco Lee)
Jamal is married to Tasha, a former lawyer who has now taken the path as a politician. This guy certainly comes across as our dream man (even though they really don’t exist, sorry to burst your bubble girls), he has a witty sense of humour and is a devoted father to his twins not only this he pulls his weight with the family not leaving everything to his wife. I’m sorry but this is really quite unbelievable, only on TV is this real.

RonReaco Lee has been on the Hollywood circuit for years, he never seems to be out of work. Ever since his youth he has appeared everywhere, Movies and a constant regular with guest spots on TV shows such as Home Improvement. Think this man has no idea when to stop.