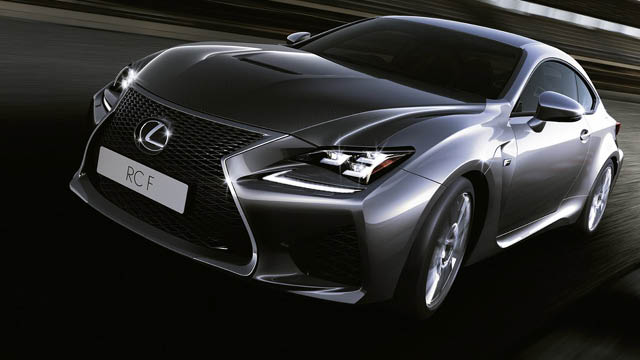 After driving the Lexus RCF for a week, I’m now, so excited to tell you about my experience. The Lexus RCF is a beautiful beast that will change the way you drive and probably change your life too.

Sometimes being a reviewer can be a bit of a drag, don’t get me wrong, all the experiences from driving the latest cars, to travelling the world and visiting new hotels, spas, restaurants and gadgets galore are generally good. However, not everything I review excites me and gets my juices flowing, so when I got the chance to drive and review the Lexus RCF I knew I was in for a treat.

The word treat is a mild sentiment in comparison to the joy this car brought to my life. If any of the directors of Lexus are reading this, please, please let me have the Lexus RCF in my life, just send me one to keep, I’ll promote it like crazy and look after it like a baby.

The Lexus RCF is a beautiful beast. Its so curvy, so powerful, so streamlined in its design, small yet big, quiet yet loud, it’s the best car I have driven in a long, long time. Its sleek, clean design doesn’t shout and scream super torque, but if you look closely, you will know that this machine has something hidden under the bonnet and it’s a hand-built 5.0-litre V8 engine.

But before I talk about the speed, let me reflect on the experience of driving the Lexus RCF. Here’s some of the things that happened while driving.

Scary kids
Driving around town with my girlfriend, I pulled up at the traffic lights awaiting the green light. Out of nowhere a child in his school uniform knocks on the passenger window and literally frightened the life out of my girlfriend. When we turned to see who had knocked on the window, we saw a spotty teen, smiling with desire, and saying ‘Wow nice car, nice car, I want this car when I grow up’. We almost wanted to shout and say ‘What the F*&k are you doing’, but instead we smiled and laughed and said thank you. The kid ran back over to his friends that were on the pavement and almost gave them motion as if his had just scored the goal that finally gave England the world cup.

Nods of approval
Almost every time I pulled up at a shop or simply just to park, I got nods and winks from other drivers, giving me the nod of approval. Of course this make you feel good and you simply nod back in recognition.

Conversations with strangers
Be prepared for conversations through your window. When driving pull up at the side of you at the lights, they will wind down your window and start asking you about the car. Here’s some of the questions I was asked by drivers and bikers ‘What’s the horse power in that’, ‘what’s the top speed’, what’s the fastest you’ve driving this car’, ‘How much did this set you back’, ‘what’s the brake horse power’, ‘how long have you had the car’… Believe I could write more but I’m sure you get my drift.

Driving with the girls
Driving with my female friends. Some of my female friends are not into cars, some of them just saw a blue car, with no idea of the make and model or speed. However, when I drove them around town, I could see their attitudes change. All of sudden they were asking what car is this, while stroking the sexy leather interior. I heard them make orgasmic noises when I put my foot down, I assume that some of the noises they made, were related to fear, or excitement or both. And without sounding too crude, most of them stepped out of the car feeling a bit errr moist. I could tell by the twinkle in their eyes when they looked at me.

The Lexus RCF is a panty dropping sexy beast of a drive. For men and women with no game, this car will do the talking for you and hence my earlier statement ‘The Lexus RCF will change your life’. The Lexus RCF comes with 4 driving modes, which you can select via the dial located near the gear stick. ECO mode reduces emissions and conserves fuel while, for everyday driving, NORMAL provides an ideal balance of power, economy and ride comfort. For enhanced drivetrain responsiveness, simply switch to SPORT or SPORT+ mode (aka Beast Mode). Take of traction control and let it rip. It will literally take your breath away.

I remember driving down the motorway at about 75mph in the middle lane, when I saw a car through my rear view mirror speedy towards me in the far right lane. At that moment I thought to myself, ‘let me know what this beast can really do’, so I switched to BEAST MODE and waited until the car came along right beside me. When we were neck and neck, I floored it… Now remember this car in the rear view was speeding towards me. I held me normal speed until that car reached me, then I hit the gas. What happened next was unbelievable. The Lexus RCF took off like a rocket, at 75mph in BEAST MODE, the Lexus RCF still had more to give. The kick back was awesome, the car speeding towards did not pass me, instead, I passed it. The driving nodding to me when we was side by side, he had just noticed what I was doing and what had just happened, he tried to give it another push but it was too late. BEAST MODE totally destroyed him, and all he could see was my sexy butt (rear view) speeding off in front of him. I felt like I had hit 120mph within a second. The Lexus RCF is a BEAST of car.

As you probably can expect, the Lexus RCF is stylish, minimalist and luxurious. The leather, the stitching, the attention to details, the ergonomics, the dashboard, all is where is should be. You do not have to reach too far to do anything in this car. You can almost keep your hands on the steering wheel at all times and still do everything you need, from changing music, to changing drive mode and more. Your partner (if you have one) will become jealous once he/she realises you have a new love. Having a partner and owning a Lexus is like having a 3some, it’s like having a 3-way relationship. You will have to share your love between both parties equally in order for each party not to get jealous.

Go to www.lexus.co.uk to read all the specs, I can list them here, but that’s what other reviewers do. I decided to concentrate on the experience of the drive, specs can be found on the Lexus site or other car review sites.

However, here’s a driving video (I wish I made this video myself) that will whet your appetite in the meantime.