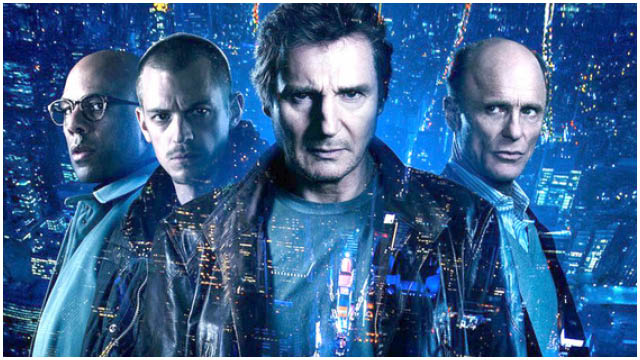 With the release of Run All Night starring Liam Neeson, Ed Harris and Common on DVD on the 10th of August Neeson and Harris sat down to answer a few questions about the film.

Run All Night see’s longtime hit man Jimmy Conlon (Liam Neeson), best friend of mob boss Shawn Maguire (Ed Harris), has seen better days. He’s haunted both by the sins of his past and a police detective who’s been breathing down his neck for 30 years, and the only comfort Jimmy has is whiskey. However, when his estranged son (Joel Kinnaman) becomes a mob target, Jimmy figures that the only way to atone for his past mistakes is to make sure that his son doesn’t wind up at the wrong end of a gun.

QUESTION:  This is your first time working together, so when it finally happened, did you sit down and have a proper chat?

LIAM NEESON:  We had been joking about going out and playing golf together and getting to know each other, which didn’t happen at all.  [Laughs]  We loved the script, we loved the words.  They work.  Let’s just do it.  And Ed and I have a huge amount of experience, so we just trusted that what we bring to the table is enough for these characters.

ED HARRIS: I wanted to do the picture because I wanted to work with Liam.  We’ve never worked together and I’ve respected him so much over the years.  It was just a total pleasure.

QUESTION:  What did you learn from each other, if anything?

ED HARRIS:  I think the heart of the matter is the relationship between our two characters.  These guys have known each other since they were children in this community in a very violent part of town—Hell’s Kitchen area.  They grew up through the whole Westies thing, which was an incredibly brutal time.

ED HARRIS:  They were both in Vietnam, and had been watching out for each other ever since.  They’re both probably still alive because of each other.  At the beginning of the film, I’m just trying to be somewhat of a legitimate businessman and Liam’s character is kind of on the outs.  I mean, he’s suffering from what he’s done in the past, things he’s done for me, actually, or we’ve done together.  And I’m trying to help him out a little bit.  Then this incident happens and everything change. QUESTION:  You’re just such a gentle soul sitting here right now and yet in the movie it’s a whole other animal.  What do you call from to conjure up that kind of angst?

ED HARRIS:  Everybody’s got a dark side to them, I think.  And so, you know, the acting thing—it’s a safe arena where you can kind of explore a little bit of that and not hurt anybody.

ED HARRIS:  And Jaume [director Jaume Collet-Serra] had a really strong approach to it.  He was very well-prepared and knew what he wanted, and, like Liam talks about, he kind of creates a film almost like a piece of music.  I mean, it’s symphonic and it has different rhythms in it, but it really flows.  The guy’s a pretty great filmmaker.

QUESTION:  There are a lot of great New York locations in this movie, like the boxing gym and that little tavern where you guys have your scene.  I could almost smell the stale beer.

LIAM NEESON:  Yeah, that’s a real little bar.  It was a composite of the outside of the bar, the premises and the inside and downstairs in the cellar, so the bar was filmed all over the place.

Ed and I were talking about that scene: it has weird camaraderie, a gung-ho, male club thing that once you have established those rules for your society, you don’t break them.  ‘You killed my son, I have to kill your son.’  ‘You killed two of mine, I have to kill three of yours.’  And it’s throughout history, isn’t it?

QUESTION:  Neither of you guys actually say that you’re in the Westies, but you name-check Mickey Featherstone.

ED HARRIS:  Well, the Westies are pretty defunct at this point.  All of those guys are either dead or in prison, and one of the reasons I think that our characters’ relationship is what it is is because they made it through all that.  I mean, that was a hellish time.  And our characters were involved with that. QUESTION:  You’re talking about where the heart is in the movie.  A lot of it was, of course, between the fathers and the sons.  Did you sense that working with Joel Kinnaman (Mike Conlin) and Boyd Holbrook (Danny Maguire) in the film?

ED HARRIS:  Yeah.  Joel and Boyd, both did a really great job.

QUESTION:  At this point in both of your careers, do people actually bother to even try to direct you or do they let you go with your own instincts for the most part?

ED HARRIS:  Yeah, I love being directed myself.  I liked working with Jaume a lot.  He would say things that were helpful.  I don’t remember particularly what—it could be any little thing—but between take one, two, three, whatever, there were little notes or little thoughts, you know, ‘How about this?’  ‘Try this.’

LIAM NEESON:  You’re just reminding me of exactly what Jaume Collet-Serra does as a director with an actor, which I think is wonderful.  Rather than say ‘Speak a bit faster,’ or ‘Could we do that quicker?’ he says, ‘You know, I think your character’s feeling very old at this moment.’  And he’d sort of leave that with you, you know what I mean?  I was like, ‘Oh, yeah, okay.’

And it influences the scene you’re about to do.  So that’s inspiring for me.  I love hearing that kind of stuff.  And you don’t hear it with directors every day of the week, far from it.  But that’s the type.  He’s always watching.  He’s technically so proficient, but he’s always watching his actors.

ED HARRIS:  You really do feel like you’re trying to fulfill his vision in a way, and so even though you don’t have an audience, if you’re performing for anybody, it’s for him.  And he responds in a way that’s very effective and helpful.

RUN ALL NIGHT IS AVAILABLE ON BLU-RAY AND DVD ON 10TH AUGUST.