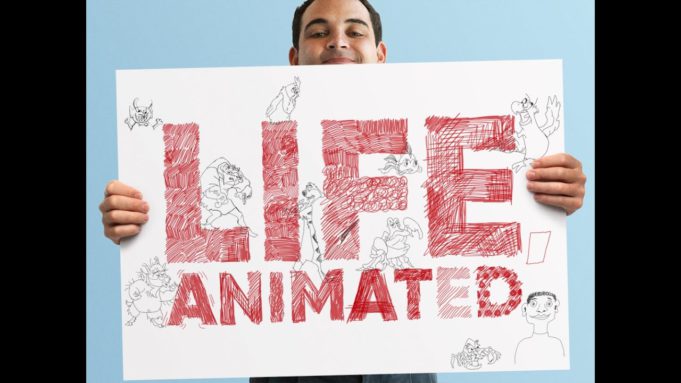 Disney as a brand is pretty inescapable and a large majority of us can safely say it’s a big part of our childhood and the nostalgia attached.

Owen Suskind is a different kind of Disney fan. After his motor and language skills dramatically deteriorated at the age of 3, specialists diagnosed him with autism. Back in the 1990s, autism wasn’t as understood and so the emotional effect on Owen’s parents loomed large. Not knowing how to care for their son and help him regain and develop his skills, they sat and watched as their bright, clever young son disappeared into a silent, anxious boy.

Life, Animated documents Owen at the age of 23, as he begins his graduation from school and transitions to living in his own apartment. Owen is a happy, outgoing character but with visible characteristics of autism. We meet him muttering gibberish under his breath on his way into school, staring at his feet as he drives forward. He clearly feels uncomfortable in certain situations and discussions with his carers and teachers unveil his inability to hold complex conversations or keep himself safe in public.

As we get to know Owen presently, his parents Cornelia and Ron (a Pulitzer-Prize winning journalist and author of the source material, Life Animated: A Story of Sidekicks, Heroes, and Autism), tell of his journey from before his diagnosis. These stories are supported with priceless home video footage and beautiful original animation from Mac Guff, allowing us to really feel and experience how these parents’ lives changed.

Footage of Disney films is used from the very beginning, but the significance of this device is only really felt when we hear of Owen’s breakthroughs through the animation. Hearing the story of when his parents finally made a reconnection with him through his love for the films is so incredibly emotionally uplifting and the heartstrings are continually pulled from then on.

Splicing his journey as a child, and his journey now as an adult, each step is supported by a relevant Disney film, which Owen himself used as a device for him to help explain and express his emotions and what he’s going through. We’re even treated to a recount of his own story from his childhood years as he imagines himself as protector of the sidekicks!

His journey is a bumpy one, from the highs of graduating and hosting a Disney Club (with a surprise special guest that brought tears of joy to one’s eyes) and the lows of relationships and stresses of change. Learning of what Owen has achieved and how art can spark hope and help communication and emotions in anyone is overwhelmingly inspiring to watch.