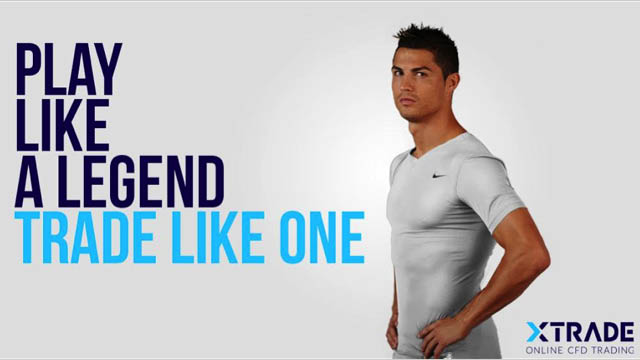 Cristiano Ronaldo is one of the best-known footballers of his time. Having shot to fame playing for prolific football club Manchester United, Ronaldo has played for top-rated Spanish club Real Madrid as well as his national home team, Portugal.

Recently, there has been quite a bit of speculation around Ronaldo’s future as a football player. According to the Manchester Evening News, United have offered Ronaldo a whopping £48.2 million to re-sign with them in the Summer. At age 31, however, Ronaldo is arguably past his peak and nearing the age where most players hang up their football boots and retire.

If you’re wondering what Ronaldo has in mind for his possibly-impending retirement, some of his latest social media posts might give you a clue. Recently, Ronaldo has become involved with online trading, having signed an extraordinary deal with CFD trading and brokerage company XTrade.com. The deal is one of the first of its kind, with high-profile footballers such as Ronaldo having been previously out of reach of retail based trading companies.

In response to the deal, Ronaldo said:

‘To be the best, you need the best. That is why I have chosen to partner with XTrade, one of the world’s leading digital trading platforms. And there is no easy way to become the world’s best. The only way is through perseverance, practice, and more practice – until perfection’.

When it comes to being the best, the former United No-7 definitely knows what he is talking about, with many considering him one of the best footballers on the planet, second only to Lionel Messi.

Forex trading might seem like an unusual choice for a Premier League football star, however, it’s definitely a wise one. Trading online is becoming more and more accessible to the public, and by using a top-level platform such as XTrade, Ronaldo has the means to increase his riches further. CFD trading is becoming a popular alternative to stock market trading, as there’s no stamp duty to pay on a CFD since the trader does not actually take ownership of the underlying asset. CFD trading is seen as a smart choice, as you can make a profit regardless of whether the market position is rising or falling.

The XTrade/Ronaldo partnership is expected to further global knowledge of XTrade and the CFD trading market in general. By using a face that the vast majority of the global population recognise, XTrade hope to further their worldwide exposure and generate more public interest in online trading.

Currently, XTrade are one of the world’s leading trading companies, with a top-rated mobile application, full customer support from more than a thousand employees, and support for thirty-eight different languages worldwide. Official representative for Ronaldo, Polaris Sports Ltd, say that their aim is to ensure that the footballer is always associated with the best global brands, and they believe XTrade is a great example of that.

Do you think that CFD trading is a wise next move for Cristiano Ronaldo? Does his support of XTrade make you want to find out what all the fuss is about? Let us know in the comments.