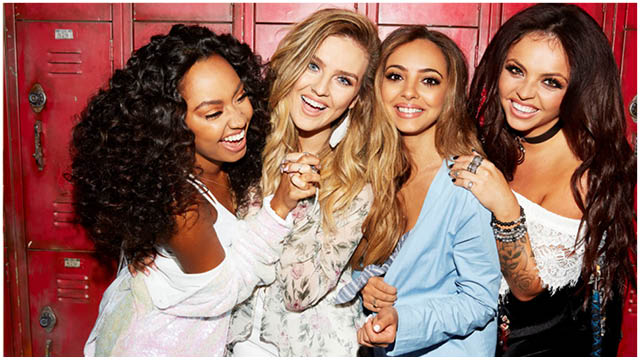 Fresh from premiering their brand new single ‘Black Magic’, Little Mix have today teased photos from the video for the song in which all four girls play geeks at High School. A teaser video will be released tomorrow (Thursday 28th June) with the official video premiering on Friday morning.

Perrie Edwards, Jesy Nelson, Leigh-Anne Pinnock and Jade Thirlwall became Little Mix in 2011 and are now the world’s biggest girl group. They swiftly became one of the premier acts in UK pop with chart hits such as ‘DNA’, ‘Move’ and their number one single ‘Wings,’ and have won both a Cosmo Ultimate Woman Award and a Glamour Women Of The Year Award. Clocking up over half a billion YouTube and Vevo views worldwide, they’ve also successfully become one of our greatest exports with massive tours in the US, Australia and Japan – breaking the Spice Girls’ long-held record of highest debut US chart position for a UK girl group in the process. From the moment it kicks in, ‘Black Magic’ will bring you under its spell. It’s an irresistible statement that pays homage to the greatest of old-school pop while remaining fresh, contemporary and exciting. The single is written by Ed Drewett (Olly Murs, One Direction) and rising UK star Camille Purcell, and produced by hot new Norwegian duo Electric.