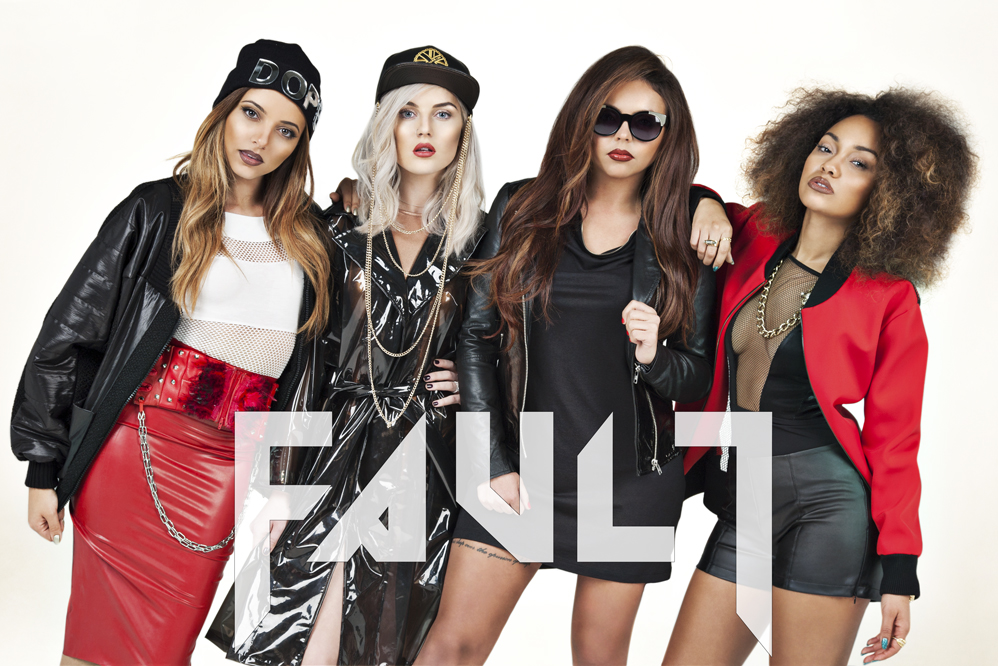 FAULT Magazine’s Winter 2013-14 Issue (Issue #17) will feature the most popular girl band of the moment – Britain’s Little Mix. The girls have a huge 12 page spread in the upcoming issue – available for pre-sale now prior to release in January ’14 – which includes the Music section cover inside the issue.

Little Mix were shot in London by Benjamin Johnson and styled by Marika Page. The punchy, in your face style of the shots reflect the band’s constant evolution in terms of musical style: not content to rest on their laurels after the success of their debut, DNA, the girl’s new album Salute has called a much wider audience to attention.

In the interview, the girls discuss their writing and recording process, their lives and their fans at home and abroad and their excitement at getting themselves known to a whole new set of fans.

The full shoot and interview is available exclusively in FAULT Issue 17– the Other Issue, released on January 15th and available to pre-order now via www.fault-magazine.com/issues

Here is the interview:

Formed in 2011 on the 8th series of The X Factor, Little Mix went on to become the first band to win the competition. Signing first for Simon Cowell’s Syco Records, they released their first album ‘DNA’ in 2012. Since then, Little Mix have toured the world, winning praise for both their music and their relentless self-respect in a genre where fame is all too often dependent on a lack of clothing. New album ‘Salute’ was released last month to rave reviews, winning universal critical acclaim. Perrie, Jade, Leigh-Anne and Jesy caught up with FAULT magazine to reflect on their success and reveal what made them turn to the dark side:

How has the way your group was formed affected its dynamic?

Perrie: I think we’re probably closer than most groups. When we went to boot camp on x-factor, we kinda gelled anyway before we were together. We wouldn’t be in this position if we didn’t have each other so we’re so close, aren’t we?

Jade: When we were individual singers, we didn’t have a lot of confidence anyway, so this was the best thing that could have happened. Every day we get closer and we love touring together. You see bands splitting off and doing their own thing; we’re always together, like constantly.

Your first album ‘DNA’ did extremely well; were you at all surprised by how it took off?

Leigh-Anne: We didn’t have any expectations of how well we were going to do, how many fans we had around the world. It was crazy. I remember the first time we went to Australia, that was the first time we went out of the UK and we saw how many fans we had, all there to meet us at the airport. It was just mad. Then it took off in America, getting a No.4 album; in Japan, the single went to No.1 in the pop chart. It’s just crazy.

You’ve won praise from fans, critics and fellow performers: which means the most to you?

Perrie: The Spice Girls have been really supportive of us, which is amazing because they were the best girl band in the world and we always looked up to them when we were younger. So to have their backing and their support is one of the best feelings ever.

Jade: The Backstreet Boys tweeted about how they loved our album.

Jesy: They said they wanted to go on tour with us!

Amidst all of your worldwide success, how do you keep yourself grounded?

Perrie: I think our families keep us really grounded, like our mams and dads would give us a slap if we got out of line. We surround ourselves with positive people who don’t blow smoke up our bums.

Jade: Yeah, they’re not constantly like “can I do anything for you? Do you need anything?” It’s much more casual than that. They tell us to carry our own bags.

You’re spending more and more time abroad; do you find that difficult?

Leigh-Anne: Yeah, me and Jess do.

Jesy: I do get really, really homesick.

Jade: We’re still young girls. Obviously, it’s amazing to go to all these places but it’s hard when you’re away for 3 weeks.

Leigh-Anne: We don’t really see our friends and family that much anyway. So, to be away and to know that we aren’t going to see them for that long is even harder. But we know how hard we have to work to make this really happen for us.

Do you have any favourite places that you always look forward to going back to?

Leigh-Anne: Yeah, we love Japan too. The fans out there are just crazy. They make us into cartoons, it’s amazing!

You’ve described your new album as ‘make or break’: does that make you more nervous about it?

Jesy: I’m excited more than nervous. This album is a step up from our first album and that was successful, so I’m not nervous. I don’t mean that in a big-headed way but I just feel so proud of it because we’ve worked so hard on it. It’s matured more, it’s more R ‘n’ B and we’ve put so much into it.

Have you always wanted to move towards that R ‘n’ B direction?

Perrie: It comes with maturity. We are maturing and we want our fan base to mature with us; we want to widen our fan base. As an artist, you always want to take one step further, gain more and get bigger. You just want to update everything.

Jade: Our first album was more like an experiment. There were so many different genres on there and every song was completely different from the rest. The second album still has that element but we’ve found our sound now. This album sounds more like a whole; there’s a theme running through it. But we quite like the versatility of having a song that really doesn’t sound like the next. That’s what makes us different: we cater for everyone, any age, both genders.

Leigh-Anne: Our main thing is our vocal harmonies and as soon as people hear a song, no matter what genre it is, they know it’s Little Mix because of the way our voices come together and the little things we do. We love having brass in our songs and this album has quite a military theme going through it.

How did you go about writing this album?

Perrie: Well we write all our own music, it’s important to us that people know that. Every song writing session is different.

Jesy: Yeah, one time we went into the studio knowing we want to write an uplifting, feel-good song. We started making sound effects and playing with them until we came across something we really liked. But if we’re in a sad mood, not as mental as we usually are, we’ll write a more serious, sad song. But ‘Mood’ came along when we were all really happy and hyper.

Leigh-Anne: Everyone just keeps calling us a ‘manufactured girl band’ and that isn’t the case at all. We write our own music, we’re involved in absolutely everything. Everything comes from us, it’s as raw as it gets.

How much freedom do you get from your record label?

Perrie: People ask us “do you see Simon Cowell a lot?” and whether he has much of an input in everything. To be honest, he oversees everything and he really knows his craft, he’s done it for a long time. But he trusts us to do everything and our label trusts us in the studio. It’s quite nice to know that everyone in our team has trust in us to pull out something good, with our fashion, with our hair & makeup. They never tell us what we have to do or the songs we have to write. We control everything which is important to us.

The new album’s artwork has a much darker theme: is that a conscious move?

Perrie: I think we’re just maturing. Obviously, our style is evolving, our music is evolving and everything is moving slowly together. We’re not wearing hot pants, gyrating on the floor. We’re just becoming a bit more classy, a bit more grown up. We’re just doing our own thing.

What is your FAULT?

Perrie: I bite the inside of my mouth, all the time. I give myself ulcers!

Jesy: When I’m in a bad mood, I find it really hard to get out of it.

Leigh-Anne: I’m really sensitive. When people say stuff to me, I take it so seriously.