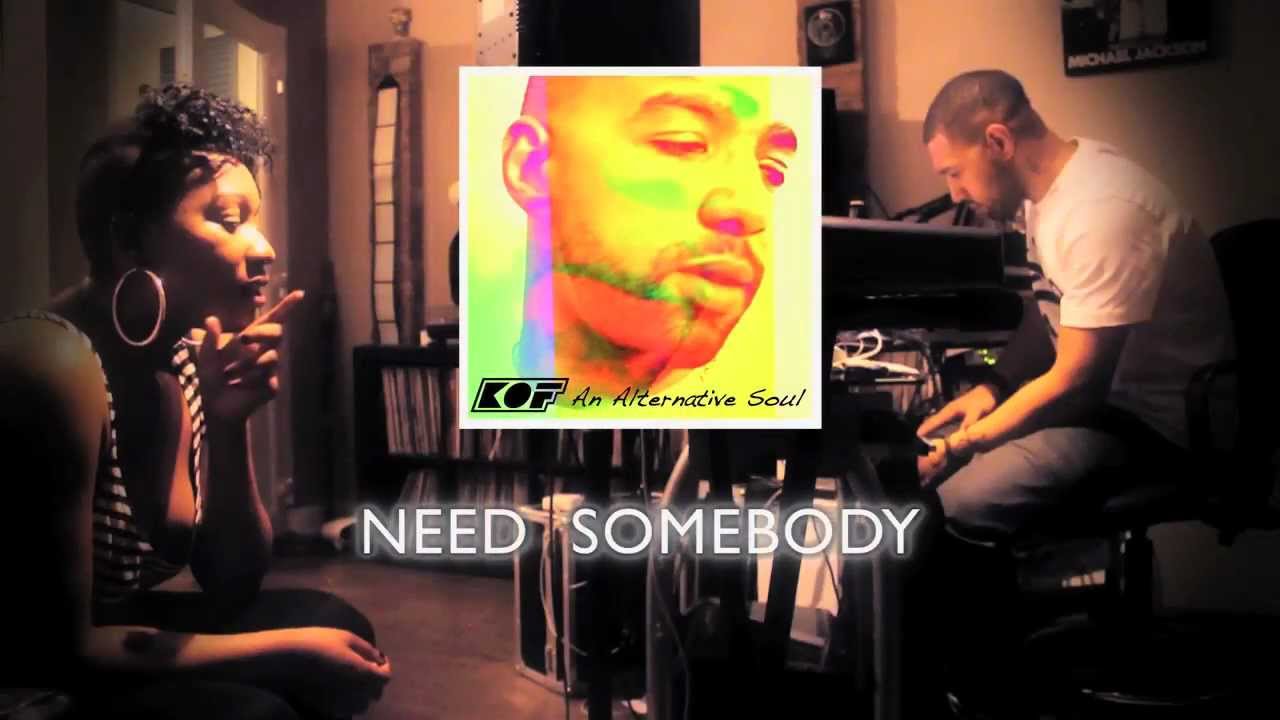 KOF is the undeniable talent from Liverpool. His smooth, soulful lyrics have caught the attention of DJ’s Trevor Nelson and Ronnie Herel. His gift of being able to write songs, sing, direct and edit his own videos means all his projects are personally looked after by him. Kof’s ‘Alternative Soul’ EP did exceptionally well, with singles ‘’Looking At Me’, Be Like You’ and ‘Child Of The Ghetto’, being playlisted from BBC Radio 1, 1Xtra, Choice FM, BBC Merseyside and more. He is currently working on his debut album telling Shireen from Flavour that features will include Exo, Benny Banks and Ratlin. You have a very soulful voice with poetic lyrics. Where does this soulful influence come from?

When I first started getting into soul, the first guy I listened to was Musiq Soulchild, and he had that tune ‘Just Friends’. I used to sing that in college all the time or any time I got the chance to sing that would be the song. Then I started listening to artists like Glen Lewis and Erykah Badu and Common, I think that’s probably where my main influences in terms of soul came from.

You’ve worked with Terri Walker on your last EP, and Wiley on your first single, two inspiring people in the music industry. If you could pick anyone to work with next that would compliment your music who would it be?

At the moment I would say MJ Cole. With Terri Walker’s track I really caught the vibe of neo-soul. I think MJ Cole could take it to the next level and give me something a bit more upbeat, but still got that soul element, and I love old school garage as well. I loved what he did with ‘Sincere’, and those kinds of tracks. I think I could vibe on that pretty nicely. I think it could be an amazing summer track that you could have a barbeque to.

London is often hailed as one of the music capitals of the world. Do you think that coming from Liverpool has made your musical journey more challenging than if you were a London native?

I think so, but it has it’s pro’s and con’s too. I lived in London from when I was 6 till 18, so my teenage experiences were here in terms of the music. Coming back to London in terms of how my music sounds, people embrace me more because they see me as being someone who is outside of their remit. Radio stations like 1Xtra have embraced me quite a lot, being that I do represent a different demographic of the UK, whether that be my attitude, my accent, or my style of music. I’m happy that I’m different from the majority of things that are going on in London.

It must be amazing to have your music supported and co-signed by so many industry heavies. Whose approval has really encouraged you the most? What kind of praise have you been receiving?

People like Trevor Nelson and Ronnie Herel. When I was bringing out this new side of music, the soul stuff, they are pioneers who I would be amazed to get played by. Once that happened it was great, then I went and met them at a show. Trevor Nelson said to me “I love it, it’s just good music and just keep doing your thing. Try not to follow to many trends, just do you. That’s what people can relate to and respect”. That was a big thing. With Ronnie Herel we went and did an acoustic cover in his place ‘Brown Sugar’, and from there he wants to work on some music. He played the first Terri Walker tune that I did, and he’s been supporting from then. There the guys I look to for that light to say your doing well.

Although your music loosely falls into an ‘urban’ category, there is a uniqueness and freshness to it that makes it hard to define. What is it about KOF that separates you from the rest?

I think it will always sound cliché, but I am different from everybody else. I think I just try and be as natural as possible, especially with the music that I’m doing at the moment, it’s just straight off the vibe and the feelings that I’m going through with day to day stuff. For instance the track ‘Get Out’, which will probably be my next single, that was one of those situations that I was going through with my ex girlfriend. The first line is ‘Keys on the table, coat on the floor, phone by the bedside, but you don’t live here no more’. As I’m writing these thing I’m looking at them, that reality of what I’m writing is what sets me apart at the moment, people can feel that in my music.

Rapper, singer, songwriter. Where do you feel your talents lie? How would you define yourself?

Not many people know but your also a budding film director and editor having edited 5 documentaries aired on national TV, and directing and editing 3 music videos. How does this other passion of yours fit in with your music career?

When I started doing it was more of a case of being able to earn money from something other than a 9-5 job that would still allow me to make music. By doing those small documentaries, I then figured out the ways to make music videos. I watched a bunch of stuff on TV, and tried to dissect it, read a few books. Now it’s easier for me writing the music, and then having the vision to be able to go straight and direct the video a week later if I need to. I don’t have to worry about too many different influences changing up the idea or the story it was when I wrote it. People say I’m doing too much and you can’t be jack-of-all-trades. It’s like if I make a song that’s my baby, I don’t want anyone to change it. It’s a gift and a curse.

Your lyrics have been described as ‘conscious,’ what does this mean to you?

Just real, I support the people who are affected by the bullshit that we have in society. I make the music that people like that will hopefully connect with. The people that have issues with poverty, with the general struggle and I’m not one to talk about ‘I’ve got this chain or I’ve got money, or I’m going to this club’. I’ve done that before even myself I know it’s not real.

Your music and lyrics possess great realism. To what extent do you draw upon your own life and past when writing, and how do you think people who have not had similar life experiences will relate to elements of your music?

Everything I write is straight from personal situation whether that be relationships, ‘Need Somebody’, that’s another relationship track. With that realisation of this isn’t really me, I don’t really like making these tunes, and then ‘Be Like You’, came about from that situation. So it’s straight what I’m going through to what I’m putting onto paper. People who don’t relate lyrically I hoping they relate to the production the way I’m trying to merge different styles with the soul music with drum n bass, dubstep the neo-soul. I’m hoping they relate to the music and the vibe that way.

I witnessed one of your live shows, which blew me away. How do you make sure you keep everyone’s attention during live shows?

That’s kind of hard because I’m a little bit shy. Sometime I have a little bit of trouble with that. Having a good band that is of a good standard. I try to play a lot of my shows with different artists, so one time I might do an acoustic with a guy from Liverpool called Phil, or I might do another acoustic set with Dev from Radio 1, or a band from London. I try and switch it up and keep everything a little bit different. I just try and get rid of the nerves and the shyness and just let people enjoy my personality and hope it comes through in my music.

You have several forthcoming international releases planned, both in Europe and in Africa, which is notable for an artist in your stage of their career. Why have you aimed your music at a wider audience before solidly conquering the UK market?

The Internet brings all these different places so close together. I think it’s so accessible to be able to release music in separate countries. I got signed by a company who distribute over 9 different territories, so they are set up to do distribution and handle the radio and the marketing over there whilst I’m over here. I don’t have to do much in the sense of going out over there. They want me to reshoot another video for ‘Child Of The Ghetto’, which is more based towards a European market. We shot it in the Caribbean, so I think they want to reshoot it because the Caucasians won’t relate to that struggle of the ghetto in the Caribbean or the black ghetto. They want to tailor it more to the concentration camp situation, where the word ghetto actually comes from.

You’ve started on your debut album, which will be released next year. Can you let us into any secrets about what we can expect from it?

You can expect the same kind of storytelling lyrics wise. The same kind of elements of the conscious artist, but more upbeat tracks. I want to really lift my live shows, because I’ve watched some of the videos back from some of the shows I’ve done, and at the moment I’m lacking the songs that can raise the energy levels when it comes to performing live. My catalogue of the new sounds of music is what I’m lacking so stuff with MJ Cole, Nutty P, and Stinkhabell. Some of the artists I’m looking to work with on the album are Donaeo. It will be the same kind of stuff, but just elevated in terms of production and the artists I’m working with as well. I’ve got some tunes with Ratlin on there, Incisive, Exo, Benny Banks as well. I don’t want to have too many features on the album, more production features.