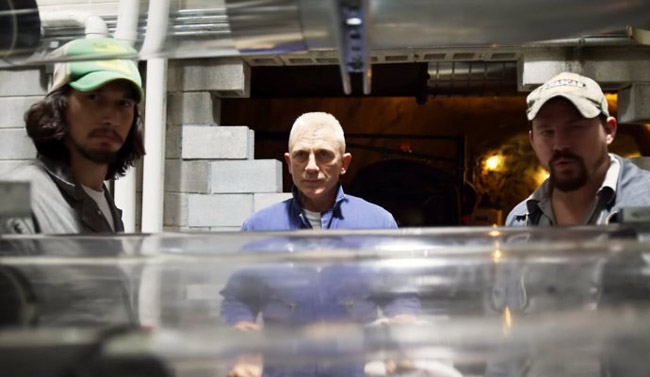 Steven Soderbergh may have bought himself out of his own self-imposed retirement to give audiences an A-plus hillbilly heist with an all-star ensemble cast in Logan Lucky, and whilst having its fun moments, fails to reach a high-speed momentum needed to give it a rocket boost to drag itself out of its crawl through the mud of West Virginian earth.

Soderbergh has an eclectic catalogue of films under his belt, the likes of Magic Mike and Behind the Candelabra come straight out of his packed arsenal, but so did the Ocean’s franchise, again, Soderbergh has reverted to the heist genre leaving behind the slickness found in that outfit by producing a poor man’s Ocean’s where in the highlight comes from the blonde haired Daniel Craig who swaps the sharper shooter suit of Bond to take up the striped overalls of a convicted criminal.

This heist story begins with Jimmy Logan (Channing Tatum), a man who dotes on his daughter but after having lost his construction job his financial world doesn’t look too bright. He cooks up a plan to carry out a heist at the local stock car-racing event with a little knowledge he obtained while working on repairing sinkholes. Recruiting his one armed barman brother Clyde (Adam Driver), and his beauty therapist/hairdresser sister, Mellie (Riley Keough), they figure they need outside help, an “expert” safe cracker Joe Bent (Daniel Craig) but they have one problem – he’s in prison.

Bent makes one deal with the Logan brother’s; he wants his own stupid clan in on the heist too. With the team complete, the heist begins. The plot twists and turns and for once it’s almost impossible to guess what’s coming next, we skip from a prison break to Jimmy’s own little subplot with a difficult ex-wife in the form of Katie Holmes and a struggle to keep seeing his daughter, but as the sinkholes are almost filled in making the crew bring forward the planned heist, the holes in the plot start to appear, raising questions about how the prison break was possible without even building a hint of story behind it.

There does seem like there is so much going on here to keep the mind busy, but it’s sluggish to get to its pivotal points and moments of nothingness loom exasperatingly large and at times the dialogue is incoherently garbled, whether that is due to the strong southern drawl or the poor sound quality it affects the delivery of crucial lines. It’s not all gloom and doom for this picture, the humour hits the mark more than enough times to round out the negatives and most of these come from Craig with his slightly feminine voice and crack hot comedy timing, the more intelligent, or so we are lead to believe, of the crew.

It’s a labyrinth of intricately woven ideas in which Soderbergh just about pulls this one off and gets away with the crime of the century with an accomplice that steals the whole damn hillbilly show.