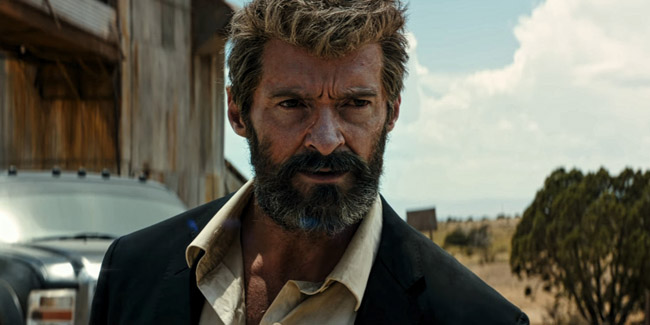 Are you sick and tired of the numerous superhero, superpower monopoly that is flooding the cinematic universe?

Logan may very well be one of those aforementioned characters but the grisly, mean and moody Wolverine has hardly ever followed the conventional suit of the superhero. With Hugh Jackman delivering his last stand of the beloved Logan/Wolverine we get an X-Men spin-off like you’ve never seen before.

Logan’s opening sequence set’s the dark, depressing and ominous tone of what is about to unfold, with limbs flying, heads impaling and blood bubbling. We are greeted by Logan in what seems a developing dystopian world in the not too distant future, an ageing Logan beaten, battered, in ill health and as always, disgruntled with the world. With the criminalisation of Mutants, Logan spends his days, hiding out earning a living by chauffeuring around teenage party animals and the like. To add gloomy fuel to the fire Logan is living in the middle of a barren land down in Mexico in a water tower with a 90 year old, mentally ailing, Professor X (Patrick Stewart), who spends his days locked in the water tower, on illegal medication to control his seizures which causes the world around them to freeze in time with earth shattering consequences, and the albino mutant, Caliban (Stephen Merchant).

The relationship between Logan and Professor X, even if not bonded by blood, they are strongly bonded by their past and it pours out like one of a father and son with the roles reversed. Logan taking on the responsibility of looking after an f-bomb spouting Charles is a highlight to behold, the pair constantly battling against each other seems so natural in its deliverance and hearing Stewart constantly throwing out the f-bomb is one of pure giggling inducing delight.

Logan’s life, as always, takes a turn which sees’s him evolve back into the angry fighting machine we all know when a little exploding ball of fire named Laura (Dafne Keen) enters their life proving Professor X was right that there was indeed another mutant out there in need of their help. With Laura we have Logan’s mini me, a growling young girl with little dialogue, but oh does she have an enormous presence. Just as deadly as Logan with her claw slicing precision and fighting prowess who quite easily upstages Logan on many occasions in their escape from the vile hired hand Donald Pierce (Boyd Holbrook) and mutant creator Dr Zander Rice (Richard E. Grant).

Turning into a western road trip movie, Charles, Laura and a reluctant Logan start to bond, and Logan gets more than he bargained for once he finds out his bond with Laura is much more than just a fellow mutant with scary similarities. As Charles and Laura seem to team up against a hesitant Logan, Laura clutches tightly to X-Men comics like they are some kind of bible which, according to Logan, spouts rubbish and idolises them in a false light, she has none of it.

A refreshing maturity envelops the third and final Wolverine, a brutal exploration of a lonely Logan world, director James Mangold has set out to create an X-Men film like no other and exceeds his own expectations, drawing out Jackman’s best performance in the role by far and delivering a movie that is bloodthirsty, gruesome with an aging maturity that packs an emotional punch. Mangold and Jackman’s Logan out classes all X-Men films that come before.

Logan is out in cinemas March 1st.