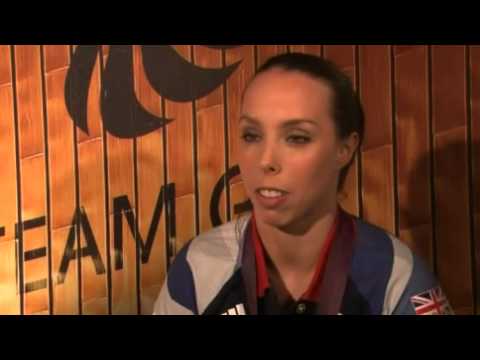 …Great Britain are in third place on the medal table, USA in second place and China in first. Let’s see if yesterday’s 19 exciting medal events altered the ranks by the end of the day, as 18 gold medals were up for grabs. Jason Kenny sprint cycled to success in the mens finals yesterday, securing Great Britain’s second gold medal of the day. The Olympic Velodrome was roaring with energy whilst a focussed Kenny adopted a tactical approach – keeping a constant eye on the competition. With one lap to go, Kenny effortlessly upped the pace and sprint cycled over the finish line first, beating world champion, Gregory Bauge of France.

Kenny became the first Team GB athlete to achieve double gold medal success after ranking first place in the men’s team sprint last Thursday along with team-mates, Philip Hindes and Chris Hoy. The 24-year-old athlete is showing steady progression, after achieving silver in the mens sprint final at the Beijing Olympics in 2008.

One of the faces of Adidas’ #TakeTheStage campaign, Victoria Pendleton, set a new Olympic record of 10.724seconds in the qualifying round of the women’s sprint cycling event yesterday. Today, the women’s sprint champion will defend her title in the semi-finals at 4:00pm at the Olympic Velodrome. Great Britain’s third medal win of the day came in the form of 27-year-old, Elizabeth Tweddle. The competition was impeccable in the gymnastics women’s uneven bars event and Tweddle secured a bronze medal in the final that saw athletes from all competing countries incur zero penalties. Referred to as a ‘gymnastic geriatric’ due to her age, Tweddle was happy with any medal. Though the question remains, could she have gained gold, had she not made that step mistake on landing?

Day 10 of the Olympics also brought some losses. Dai Greene, Team GB’s 400m hurdles medal hope, only managed to scrape his way into the semi-final, making it as one of two fastest losers. As he held his head in his hands, the disappointment was intensified as only Dai and Mozambique’s Kurt Couto failed to set a new record, seasonal or personal best in their heat. The disappointment was cemented when GB’s Greene came fourth in the final as US-born, Dominican Republic athlete, Felix Sanchez picked up the 400m hurdles gold yesterday. 20-year-old Holly Bleasdale from Blackburn admitted she is ‘heartbroken’. She ‘struggled to cope with the
conditions,’ and fought back tears when her hopes of achieving a medal for Team GB in the Olympic pole vault event appeared to be slipping away. Though her day appeared to brighten when she tweeted ‘6th in the Olympics and @bradshaaaw proposes to me : ) epic day!!!’. She ranked in joint 6th place with Czech Republic’s Jirina Ptacnikova and Germany’s Lisa Ryzih – who all managed to clear the bar at 4.45m, Holly then got engaged, providing a bittersweet outlook on day.

Germany’s Stephan Feck suffered an embarrassingly painful exit from the men’s 3m springboard event. It appears that his foot slipped off the diving board just before he entered the water on his back. One commentator described the dive attempt as ‘the first calamity’. ‘Oh my goodness it’s silent in here,’ the commentator exclaimed before talking us through what happened. ‘He landed on the end of the diving board and his foot completely slipped off the side – he probably lost a toe nail or two there… Slips off the side of the board, doesn’t get in his pike shape, only has hold of one leg, looked a bit like the Isle of Man and then absolutely smacks himself like he’d just been slammed in wrestling’.

Cypriot fans were extremely pleased to receive their first medal today. Sailor, Pavlos Kontides, secured a silver medal in the men’s laser event. It is the first medal Cyprus has ever won in the Olympic games. There was also first time medal success for Grenada yesterday, as Kirani James stormed to gold medal victory in the 400m last night. It could be the first of more to come, as well as Team GB victory in the women’s 200m. Round 1 of the track event saw GB’s Margaret Adeoye come third, achieving a personal best of 22.94seconds in the first heat. Anyika Onuora unfortunately came fourth in the second heat, failing to qualify. Although Abiodun Oyepitan  came second in the third heat with a time of 22.92. 0.2 seconds faster than her compatriot, Margaret Adeoye. Team GB’s hopes of women’s 200m success lies in the hands of this Nigerian duo. Tune in today to see if they make it through the semi-finals. So Great Britain is still sitting in comfortable third place on the medals table with the gold medal tally up two, to 18, silver remains at a tally of 11, GB now has 11 bronze medals making a total of 40 medals. United Sates of America have 63 medals in total, hot on the heels of the People’s Republic of China, with a total of 64 medals. Tune in today as 24 medal events are set to take place.