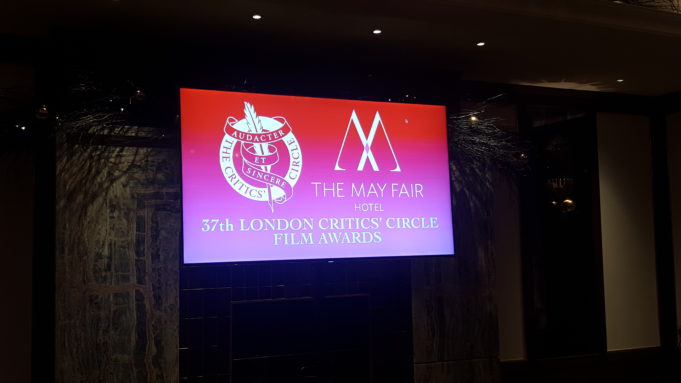 Both are up for Film of the Year, as well as multiple acting honours. The gala ceremony will be held on Sunday 22nd January at The May Fair Hotel.

Following close behind is Maren Ade’s German comedy Toni Erdmann with six nominations, while La La Land, Manchester by the Sea and American Honey have five citations each. The winners will be voted on by 140 members of The Critics’ Circle Film Section.

The nominations were announced at The May Fair today by actress Chloe Pirrie and actor-filmmaker Craig Roberts. The 22nd January ceremony will again be hosted by actor-filmmakers Alice Lowe and Steve Oram, who won the critics’ Breakthrough Filmmakers prize in 2012 for their screenplay for Sightseers and have gone on to write and direct Prevenge and Aaaaaaaah!, respectively.

“Our critics nominated more than 160 titles for Film of the Year alone, representing the range of wide opinions and the sheer number of movies critics watch each year,” says Rich Cline, chair of the Critics’ Circle Film Awards. “There was love for everything from Aferim to Zootropolis, including Captains America and Fantastic, plus acclaimed women from Jackie, Julieta, Moana, Christine, Krisha and Victoria to Miss Sloane and Florence Foster Jenkins. Making it onto that final list of nominees is never easy.”

British actors Naomie Harris, Andrew Garfield, Kate Beckinsale and Tom Bennett each received nominations both for specific performances and for their body of work in 2016. Unusually, the writer-directors of four Film of the Year contenders are also nominated for both Screenwriter and Director: Moonlight’s Jenkins, Toni Erdmann’s Ade, La La Land’s Damien Chazelle and Manchester by the Sea’s Kenneth Lonergan.

In addition to Film of the Year, Gianfranco Rosi’s immigration-themed film Fire at Sea is also nominated for both Foreign-Language Film and Documentary. Also contending for Film of the Year are Andrea Arnold’s American Honey, Tom Ford’s Nocturnal Animals, László Nemes’ Son of Saul and Ken Loach’s I, Daniel Blake.

The full list of nominees for the 37th London Critics’ Circle Film Awards:

DOCUMENTARY OF THE YEAR
The Beatles: Eight Days a Week – The Touring Years
Cameraperson
The Eagle Huntress
Fire at Sea
Life, Animated