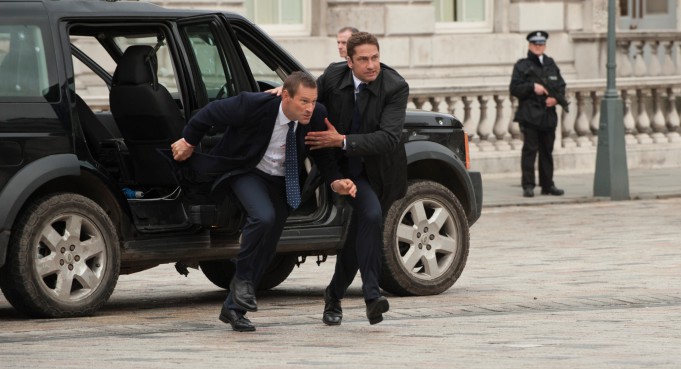 Three years ago Olympus has Fallen was heavily criticised by critics but this didn’t stop Iranian/Swedish director Babak Najafi taking over the director’s chair to deliver his first English language film with another high octane, wild and extremely tongue in cheek sequel with London Has Fallen.

In London Has Fallen action hunk Gerard Butler reprises his role as Secret Service agent Mike Banning, right-hand man and saviour to US President, Benjamin Asher (Aaron Eckhart). It doesn’t take very long before the unrelenting action starts to commence, and for Butler to get to work without shedding an ounce of sweat. However, the film starts a calmer note, just to get you warmed up with a few laughs. We see him at home with his heavily pregnant wife Leah (Radha Mitchell), playing the overprotective Dad “does the nursery really need six cameras” and his agonising struggle to write that damning resignation letter from the job he loves. When the British Prime Minister dies very suddenly in his sleep from a suspected heart attack, the world’s leaders are summoned to Britain for his funeral. What starts out to be one of the most protected events in the world soon descends into chaos as the plot to kill the world’s most powerful leaders takes hold. Along with the terrifying scenes of seeing London’s most iconic and beloved landmarks blown up, the comedy also rears its head as it pokes fun of our real-life leaders. The Italian Prime Minister is shown giving his much younger mistress a private tour on the rooftop of Westminster Abbey.

Predictably it’s President Asher who manages to come out alive with the help of the trusted one man killing machine Banning. The threat doesn’t end there as the terrorists have a mission, to kill the president live on the internet in order to change the world forever. The men are seen being relentlessly chased across a disturbingly and more than unlikely central London dodging a hail of bullets in the enthralling car and foot chases shot down from a helicopter which they disbelievingly walk away from completely unscathed with nothing but a few scratches on their heads, only to see the president mercilessly kidnapped.

Even through the toughest of moments, you could almost see in our leading men’s faces that they didn’t take this very seriously, Butler more than most. It appears from facial expressions alone they are mocking themselves. Even the sturdy calm deputy president, Morgan Freeman seems to want to titter out loud.

London Has Fallen never takes itself seriously and the scriptwriters have done an excellent job at sending itself up and poking fun at its own storyline. Whilst in a fight to the death with the lead terrorist Cameron, Butler delivers the line “Does this fucker ever die” considering the numerous car crashes, bullets fired and alike we could say the same for him and Eckhart. London Has Fallen is certainly a high octane, exaggerated guilty pleasure. It’s full of the normal clichés but the tongue in cheek moments and its ability to send itself up as well as the flawless action sequences will keep you ashamedly entertained.

London Has Fallen is out on the 3rd of March