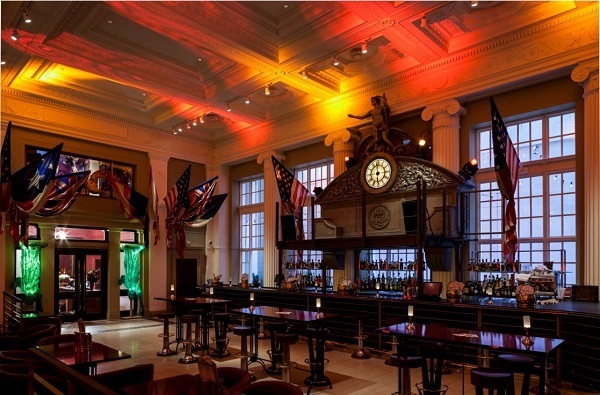 I’m always excited by a new restaurant opening, especially one   We went to sample the newly opened prohibition style, Steam and Rye in the City.

A beautiful, charlston dressed host showed us through a packed bar to our table.  It is Christmas party season and at 9pm it’s in full swing, with a trio of 1920s style singers on stage. the dinner tables cradle the dance floor and bar and it’s loud, soon becoming horse from shouting at eachother we literally give up on conversation and simply enjoyed the atmosphere.
Our waiter was a charming fellow who I trusted to choose my cocktails for me, partially because it was too dark to read the querky menu. It’s made up of typical American staples, chicken wings which were juicy and fell off the bone, steak of various varieties, again cooked perfectly and lobster, which seem to be in vogue in London at the moment.
I had crab cakes to start which were deliciously crisp on the outside and light and fresh inside. My main was the dover sole which was a little disappointing, it came without sides and would have been nice if the waiter had pointed this out, instead I was presented with a  whole fish and chunk of lemon on a large plate which I had to fillet in front of my date, luckly I am good at that but don’t think picking through bones is an attractive ice breaker.

The desert menu was a little limited, my choice of apple cobbler had run out so instead I went for the cheese cake wich tasted freshly baked and creamy.  My dates chocolate browny was too rich, literally chocolate overkill, which you’d have to be extremely pre-menstral to enjoy.

The entertainment rotated between some super sexy dancing girls and the singers, all fun and certainly caught the attention of my male companion.  Unfortunately because of the distance between us at the table and the noise level we simple could not conversate which was a real let down. Although the food is good the waiter was much more ofay with the cocktails which seem to be this place’s stand out feature ranging from the classics to shots served in cowboy boots and icy popcorn boxes.  For the price of food which is about £40ph for 3 courses (without drinks), although there are deals to be had in the week if you check the website, you really are paying for the entertainment so ideal for a group going out for a birthday dinner. With food to suit all tastes and a club thrown in, the large dining boothes looked great and the atmosphere is ideal for a party.