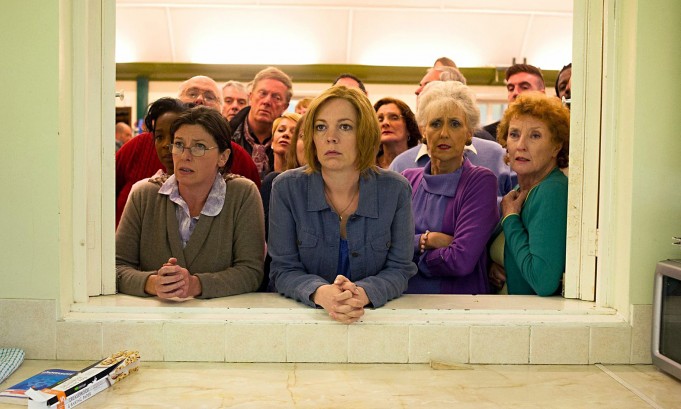 London Road is a film adaptation of the 2006 serial murders in Ipswich and the effects it had on the residents of London Road, a grim red-light district where the killer lived and where one of his victims was found.

Based on the play from 2011 and set to a musical score, everything about this screams it shouldn’t work but it just does, even giving it that authentic depressing vibe which tells the story of its inhabitants quite intimately. When we join the film the murders are already fully in force, jumping from house to house giving us a first glimpse of inside the grimly lit resident’s houses until the newsreaders burst out into song. Uniquely, the lyrics to the musical numbers are not just made up from the imagination of a scriptwriter but actual real interviews from the people living in the area themselves.

Everything becomes quite surreal and almost dreamlike as every many of the city becomes the suspect in each other’s eyes leading to the song, constantly repeated and remixed are the words, ‘You automatically think it could be him’ coming from the lips of teenagers and woman of all ages. Tom Hardy has a small starring role as a mini cab driver, picking up a woman fare, they talk about the murders. Instantly you become weary of Hardy’s character and wonder could it be him as he divulges the information that he has a keen interest and specialises in serial killers, but goes on to state he isn’t one, making you even more suspicious.

As the case of the murders progresses the killer is apprehended on the street of London Road and the residents on the street are traumatised to learn they have been living amongst a killer as well as having to deal with the prostitution that has taken over their street.  As the trial of the murderer, Steve Wright begins, the residents lead by Olivia Colman’s character start to bond and create that good old British community spirit. It’s almost as if they are taking some kind of joy out of the fact this horrific period in their town’s history as brought the community closer.

As the trial comes to an end the residents hold a street party, one in which they will be judging the ‘In Bloom’ garden competition which was commissioned in order to bring some life and colour back to street in an attempt to clean up the area. It still has a strange atmosphere to it as though the residents have found a new way to vent their remorse and fear for what has previously happened.

London Road, even though a musical, is still a gripping, innovative thriller which goes against convention to deliver a truly riveting story.

London Road is out to own on DVD October 5th