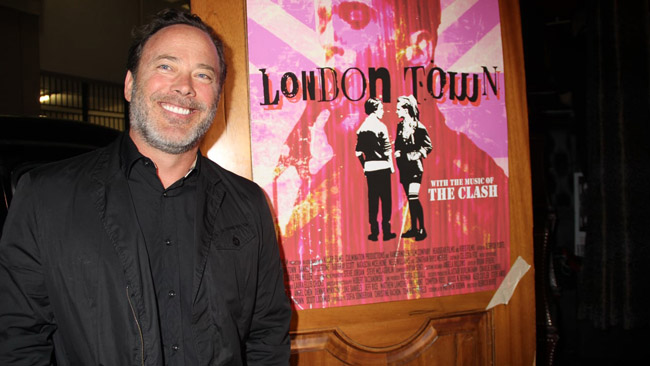 With the release of British coming of age film, London Town on DVD and VOD – which also saw it premiere at this year’s BFI London Film Festival – Director Derrick Borte chats about the film.

England, 1979, unemployment has hit the working class suburbs of London. 14-year old Shay Barker (Daniel Huttlestone) is forced to grow up quickly as his family struggles to stay afloat in Watford, taking care of his 6-year old sister whilst his father Nigel (Dougray Scott) works two jobs. One day, Shay receives a package from his estranged mother Sandrine (Natascha McElhone) with a cassette tape enclosed featuring the newest music from London, leading him on a journey of self-discovery. When he meets 15-year old Vivian (Nell Williams) on a train who introduces him to The Clash, it doesn’t take long for him to dye his hair black and immerse himself in the punk scene.

Drawn into the heart of London’s burgeoning punk scene, Shay forges two relationships that will change his life. He falls in love with rebellious cool girl Vivian and finds an unexpected connection with The Clash’s electrifying frontman Joe Strummer. Set against the social turmoil and strikes of England’s ‘Winter of Discontent’, propelled by the blistering soundtrack that also includes music from Buzzcocks, The Ramones, The Stranglers and Stiff Little Fingers; “London Town” captures the sound and spirit of a scene that shook the country, and the world.

What was happening during the time this film takes place?

Although we’re not specific with the dates, the film takes place around The Winter of Discontent (1978-79). There were widespread labor strikes over wage controls, and race relations in Britain were in total crisis as The National Front was gathering power and immigrants lived in fear of violence.

What’s the importance of telling the story through the eyes of a young boy?

Joe Strummer said that “everyone has a story to tell”. As much as I’d like to think that this is, in some way parts of my story, It’s really Shay’s story. I think we all have that moment in time where that one song, or that one record, changed our lives. That’s the power of music. I always felt like the most interesting thing about The Clash was always their music and its influence on people. The music transcended the band. I remember the moment I heard that first Clash album the first time, and it changed my life. It always made sense to tell this story through the eyes of a young boy, and one that was experiencing all these things that were also influencing the music.

What is it about the music from The Clash that makes for a good backdrop to telling this story?

The Clash’s politicised lyrics, musical influences from reggae, dub, funk, ska, and rockabilly, and overall punk consciousness all make for a great backdrop to telling this story, just as they did at the time they originally released that first record.

Were they the voice of the working people?

I read somewhere that they were a group whose music was special to their audience because it addressed the conditions of poverty, injustice, and mundane life experienced by the people who bought their records.

Would you say this film is a history lesson?

I wouldn’t say it’s a history lesson, but maybe it touches on just enough of the history that it inspires someone to want to delve deeper into the circumstances that birthed the punk scene.

How is music part of our political landscape now?

Music is so much a part of our human landscape now. Politically it’s used to protest as well as celebrate. I love the fact that all these artists are coming out and refusing to let Trump use their music for his campaign. I’m sure there’s already music being recorded that talks about him the way the punks sang about Thatcher or the British monarchy.

Was there a time when music had the power to influence politics?

I don’t know how much influence it’s had, I’m sure some, but it has certainly addressed and challenged politics throughout history. From Woody Guthrie and Dylan to Bob Marley, The Clash, NWA, and Rage Against the Machine, there’s a long list of artists whose work was/is very political.

Is there a scene in the film you felt needed to be told a certain way?

The scenes that feature the band were at the top of the list as far as what needed meticulous attention to detail. From casting them, to the sets, to how they were shot, every step of prep was about remaining true to the spirit of The Clash. Ray Gange, who was close friends with Joe Strummer and the band, came to set one day. I watched him as we shot the rehearsal scene and I could tell he was into it. When I talked with him he said that watching that scene took him right back to the first time Joe brought him to meet the band at rehearsal, and he said it was just surreal and how much we nailed it. He said that people will try to pick the authenticity of the film apart – this song wasn’t on that album, the guys don’t look EXACTLY like the band, etc., but that those who were actually there, who knew the band, would be blown away by how we captured that essence.

Jonathan Rhys Myers performs all of the songs himself, how important is that for the realness of the film?

I didn’t want Johnny to be singing (lip-sync) to original recordings of The Clash. I felt like that could go horribly wrong. Knowing he was musically inclined and could sing, as he has in a few films, I wanted to record him actually singing and the band actually playing the songs. We went into the studio with Grammy award winning producer Steve McLaughlin and recorded all the live tracks. Johnny and the band were really amazing, and I think Steve’s positive reaction to the work we did was all I needed to see to believe that this was the right choice for the performances.

London Town is available now on digital platforms in the UK and Ireland and DVD on January 2nd, 2017.