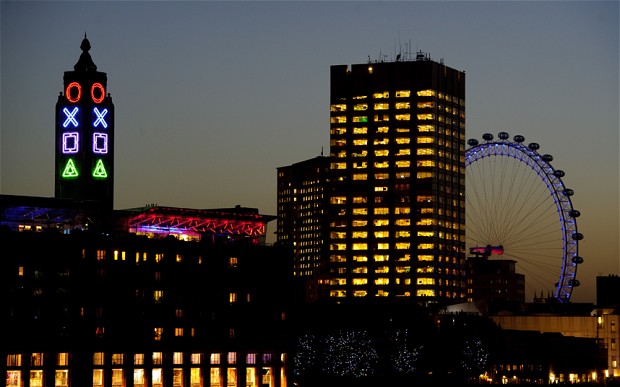 Anyone in and around the capitals South Bank on Thursday would of began to notice a transformation appearing on one of the rivers more prominent buildings. A circle, a cross, a square and a triangle lit up the OXO Tower in an incredible PR stunt ahead of the release of the Sony Playstation 4 on November 29th. Social networks were abuzz with excited gaming fans all over the world sharing the striking image across Twitter and Facebook.

That evening I was invited to a star-studded bash on the OXO Tower’s 8th floor for a launch party to celebrate the consoles imminent arrival. Star’s such as The Wanted, Jonathan Ross, Dynamo, Dizzee Rascal and a number of Premier League football players were in attendance to sample the future of gaming. After helping Tottenham Hotspurs midfielder Sandro find his beloved Brazil on Fifa 14 it was my turn to play the popular football game. The graphics are beautiful and fans of the franchise are in for a treat come the 29th. I enjoyed the game-play and was left wanting more, despite being comfortably beaten 3-0 in front of an intrigued audience (which of course I will put down to the cocktails!) It was a great night and Sony’s PR team have certainly put the console in the best possible position ahead of it’s release date!

Remember you can head down to Covent Garden to play the PS4 before it’s relese. The PS4 arrives in the UK on November 29th.