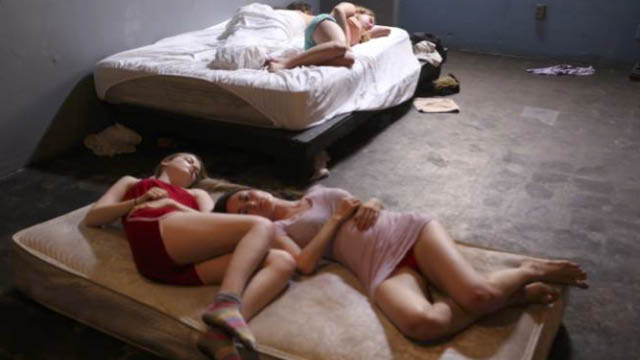 According to the International Labor Organisation, 4.5 million people are victims of sex trafficking worldwide including the US’.

This fact is part of the final words on screen of Julia Verdin’s harrowing short film, Lost Girls. The British producer was inspired to write the script for this, her directorial debut, after volunteering at Children of the Night, a shelter for runaway girls and feeling heartbroken by the stories she heard of the abuses these very young girls had endured.

To depict the horrors of the sex trafficking world, Verdin didn’t opt for a usual documentary but instead put everything into a simple fictional story with a run-time of just 23 minutes. Following sheltered teenager Marisol, the film explores how quickly and easily impressionable and vulnerable young girls can be targeted and then trapped in the terrifying sex trafficking business.

From the beginning, despite the slightly hammy acting, the tone depicts a sense of discomfort. The cast refine their roles over time, with a realistic, over-protective mother, young Marisol (played confidently by Cristina Cibrian, previously seen in The Middle) seeks acceptance and freedom through cool older girl, Kara (Bar Paly, known for her roles in Pain & Gain and Non-Stop), whose job is to lure girls before drugging them and using them for prostitution.

With a simple plot, Verdin extremely effectively delivers what she wants the audience to see. A reconstruction of the horrifying acts committed every day. Almost impossible to watch at many points, the cast and crew have treated the subject with a sensitivity but also an urgency, as this film isn’t for entertainment, it’s for education; it’s a call for help.

Lost Girls is a moving, tense thriller with a simplicity that makes it all the more effective. It will resonate with all who watch and teach those about the sex trafficking world and how much closer to home it is than we may realise.