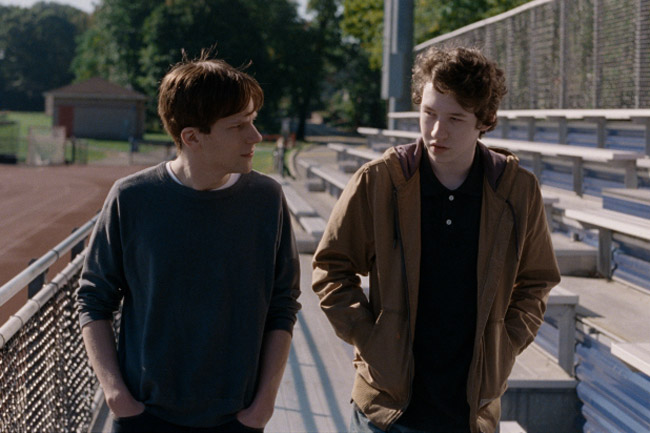 How we cope with the death of a loved one differs from person to person, Louder than Bombs tells a tale of one family’s grief at the loss of their mother and wife, with somber, poignant moments hitting home with a heartbreaking grace to all of us.

Director Joachim Trier presses on the nerve of a family in turmoil in Louder Than Bombs, it resonates loudly, but this a family who repress their grief in a subtle, gentle demeanor. The heavy use of Flashbacks engulfs the film to tell the almost photographic story of a woman, who was once a photographer in war-torn countries, own struggle with living life on the front line to finding her life so empty when she retires it causes her to take her own life.

Three years after the death of mother and wife Isabelle (Isabelle Huppert) an exhibition of her photographic work is to take place in her memory but this also opens the wounds of her husband, Gene (Gabriel Byrne) – who seems to be in an unrewarding relationship with his son’s English teacher – and two sons Jonah (Jesse Eisenberg) – who has just become a father himself, but when faced with an old flame when he returns home to sort through his mother’s work for the exhibition embarks on an affair, and Conrad (Devin Druid), a young man now but was never told his mother committed suicide because he was deemed too young to be exposed to the truth. As we meander tenderly through the three men’s life in the lead up to the exhibition Gene struggles with how he will tell Conrad the truth as it will soon appear in the press, while Conrad seems to harbour some anger and strange writings which takes Jonah quite by surprise. The cast performances feel almost effortless from a film which oozes class with an extremely beautiful piece of cinematography.

Unfortunately, each sequence of events is met with a serene ambiance which makes the film less than engaging. We never quite delve deep into the souls of these men as the story of loss and grief plays out. All we see is what’s on the surface, if the filmmakers dug a little deeper to give us a more human story we might just have been onto a winner.

LOUDER THAN BOMBS comes to DVD and Blu-ray Monday, August 15