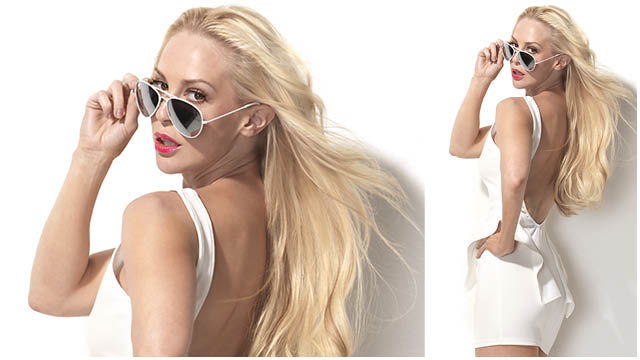 Louise Linton is pretty much a hot talent floating around tinsel town right now, but did you know she’s from good old blighty?

With her first feature role in Rom Com Serial Daters Anonymous about to hit the screens in the summer, We had the opportunity to sit down with her and have a little chin wag about growing up in a Haunted Castle in Scotland, how she went from Scotland to Hollywood and her perfect 1st date.

We’ve read you were raised in a castle in Edinburgh which sounds pretty fancy, Tell us a bit about your upbringing?
I spent the weekends at Melville Castle. It was an idyllic childhood spent mostly outdoors with all the animals. My siblings and I zoomed around on little motorbikes, kayaked, fished, spent time racing through the woods shooting each other with bebe guns. It was a very normal life. The castle is magical and filled with so much history. I’m filming a movie there this winter. It’s going to be really exciting to film in Edinburgh. I’ve never worked on any UK productions and I’m sort of thrilled the first one I shoot there is one I’m producing and very passionate about.

Living in a castle there had to be stories of it being haunted! Did you encounter anything paranormal whilst growing up?
The castle is definitely haunted. Many people have claimed to see the ghost. Some say she is Mary Queen of Scots because it’s where she had her romance with Rizzio. They planted three oaks trees which are still on the property. I think that’s quite romantic. Others say she is a woman named Elizabeth. People see her in room 108 or in the library bar. I was too scared to ever be alone in the castle as a child because of the ghost, so thankfully I never met her, but I know people who did! The stories are amazing. She always appears in the autumn and winter, and always in the afternoon- when there’s still daylight.

How have you managed to go from growing up in Scotland to taking Hollywood by storm?
It’s been a slow burn up til this point. A lot of hard work, blood, sweat and tears. I had a dream as a child, and I just haven’t quit, and won’t quit til I see it come to fruition. You’re only 28 but you’ve already worked alongside some big icons such as Tom Cruise, Meryl Streep and Christopher Walken. Did they teach you anything on set? Where you just the slightest bit star struck at all?
I worked with Robert Redford on Lions For Lambs (my scenes weren’t directly with Meryl or Tom) and what “Bob” as he prefers to be called told me, was to know the lines for every character I worked with and not just my own. I got great advice from Shailene Woodley on my first job in Hollywood on CSI. We starred in an episode together before she was famous and she was incredibly professional and nailed every take. Warren Beatty directed me in his upcoming Howard Hughes biopic. I learned so much from him. He’s old school and a perfectionist. I felt honored to work with him in so many ways. Not only is he the nicest guy on earth, he’s the most talented writer, director, actor triple threat ever. Just watch “Reds” and you’ll see what I mean. I think other than that, I’ve learned more from actors I know off set that on… Like Jack and Al … boy do they have some incredible stories! There’s a lot to learn from just listening to great actors talk.

You’re about to star in a paranormal film Intruder alongside music mogul Moby, What attracted you to the story and how easy is it to work alongside someone who is predominately a musician?
We filmed Intruder last year in Portland, Oregon because the rain set the right tone for the movie. It’s a psychological thriller about a cellist in the Portland Philharmoic who spends a rainy weekend at home, without realizing there’s someone inside her house with her. I knew I loved the concept when the director called and pitched it to me. The hairs on my arms went up and it felt like a sign. If something is scary, it’s marketable. I’d worked with the director, Travis Z, on his first film Scavengers, in which he gave me my first ever lead role. We worked so well together I couldn’t wait to make another movie with him. He’s a visionary and a story-telling genius. When he told me the idea for Intruder I was thrilled. I had just started my production company and was looking for a way to get my first project off the ground, so that’s when I decided to come onto the film as a producer as well as actress. Working with Moby was fascinating. I had loved his music growing up and just couldn’t believe we were acting opposite each other. He’s a powerful actor. I think people will see a new side of him when they see this film. He remains a friend and I think he’s one of the most interesting and kind people I’ve worked with. You certainly like to keep yourself busy; you’ve been cast in the forthcoming horror reboot Cabin Fever, working with Eli Roth. This is massive grossing franchise to be a part off. How did you react when you got that call?
Eli is presenting the film but he’s not an actor in it. I worked very hard to get that job. The audition process was tough. It was amazing working with that cast and crew. I feel incredibly lucky to be playing the iconic character Deputy Winston who was played by a man in the original. She’s an awesome character. I can’t say any more!

Not only that, this upcoming summer we are about to see you in your first feature lead role in Rom Com Serial Daters Anonymous with Sam Page as your love interest, How do you go about making the transition from a horror to a lovey dovey rom com?
Each new role requires transition because each character has a very different life story and attitude, even if they all fall into one genre or different genres. Acting is fun for me whether it’s drama, action, horror, romance, or comedy. It’s one reason I love to do film over television. I want to play a lot of different roles in film more than I want to play one role on a TV show for a long time. I love change.

Was there any real-life heat between you and Sam on set?
I can’t speak for Sam, but I found myself blushing in our scenes. It was very easy to act with him because he’s just so darn good-looking and charming on and off camera. Our first scene together involved a long and passionate kiss. It was one of those days when I said, “Tee-he, I love my job!”

Your list of achievements to date is endless, including starting up your own production company, Stormchaser Films and launching your own handbag line for Scottish fashion house Dunmore, How do manage to have the time to juggle everything?
Sometimes it feels like I have too much on my plate, but I enjoy being busy, and I love everything I am doing so even if it’s stressful I’m still grateful to be doing what I do. I work 24/7. My friends get annoyed I can never chill-out and not work on weekends. I live in LA but I am NEVER by the pool. Too much to do at my desk! It appears you don’t do things by half, Is it true you can call the likes of Russell Crowe, Jach Nicholson, Katy Perry and Prince Albert of Monaco as friends? How on earth did you manage to bag such an elite group of people as your friends?
Some are friends, some acquaintances… Hollywood is a small town and everyone knows everyone else as we all go to the same events and festivals, such as Cannes and Sundance. You get to know each other over time. Everyone is connected by our work, but the rule in town to keeping friendships is to not talk about them!

We like to add a bit of fun to our interviews so have added a few dating questions for you. Who would be your ideal man and why?
Edward Lewis (Richard Geare’s character in Pretty Woman) because he’s handsome, intelligent, powerful, smart, yet devastatingly romantic.

What’s your perfect 1st date.
Well, now I’m thinking about that movie, how can I not say “gorgeous red evening gown, borrowed diamonds from Harry Winston, and a jet to the opera in San Francisco with Edward Lewis”? I mean, come on… now that’s a romantic date!

Give us 3 things that are a turn on and 3 that are a turn off.
Turn on: Intelligence. A man who can really dance. Wit.
Turn offs: Men who wear a lot of shiny jewelry. Weakness. Lack of ambition.

Would you ever date a co-star?
If I was single, sure, why not?