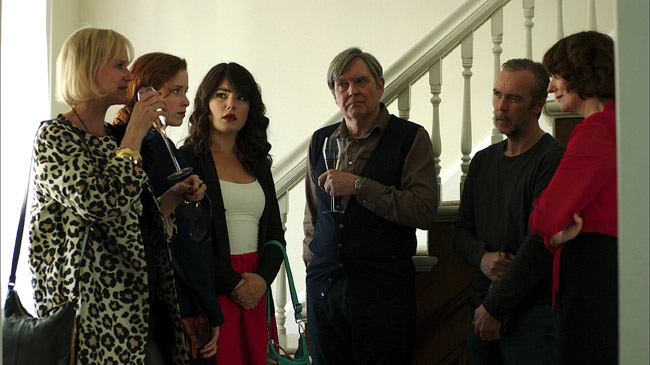 Comedy-dramas are a blend of what’s great about both genres: the performances and story ground a film emotionally and are balanced with humour that elevates the experience, and can also move the drama to a more relatable world.

Love of My Life benefits largely from its use of humour, yet the drama is not quite strong enough for the brilliant story it wants to tell.

Architect Grace (Anna Chancellor) is diagnosed with a brain tumour just five days before potentially fatal surgery. Brushing off the odds as if they were simply the chances of rainy weather, she spends her week handling a growing amount of emotionally unstable family members, including the unwelcome arrival of her ex-husband and his estranged wife.

The tone is reminiscent of Channel Four dramedies and the plot is perhaps something that could’ve not only worked but been elevated, in a series format. With not much particular concern for impressive technicalities visually, the spotlight really does fall on the performances and plot.

The plot itself is the star, bringing fresh ideas to character interplay and exploration of motives in a finite space of time. James Fleet’s weepy and slightly senseless husband, Tom, is a brilliant display of both humour and human weakness and vulnerability. John Hannah as the impulsive and relentless ex-husband, Richard, provides a compelling look at love in the face of death. Yet there’s so much potential that’s unfulfilled due to the weak links scattered throughout, notably the two daughters and their cringingly cliche scenes.

The film seems to split down the middle with half the characters having refined developments, coupled with completely engaging performances; while the other half are left with unconvincing dialogue and formless characterisation. Comparing Grace and her daughter Kaitlyn shows the starkest contrast. Grace’s character is dealing with devastating news which she brushes off unconventionally and instead has to deal with the various breakdowns of her family, which Chancellor does with conviction. Although Kaitlyn is only a supporting role, her fixation with having fallen in love is devoid of any substance, leaving her with fruitless lines such as “oh, I have a text”.

The unfortunate lack of consistency in Love of My Life is its downfall. What could have been a delightfully eccentric black comedy with a moving and poignant exploration of relationships in the face of adversity, ends up being a mishmash of difference leagues of performance and characterisation. The slack cannot be ignored, leading to a sense of disillusionment that even James Fleet’s drunken sobbing cannot save.

Love of my Life will be released in selected UK cinemas on 17th February 2017.