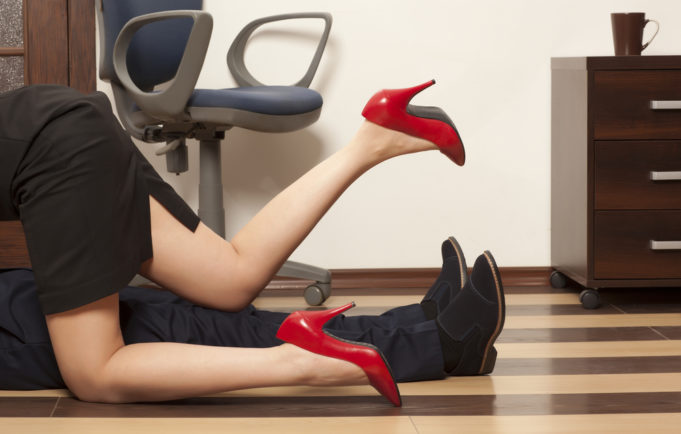 Affairs in the workplace are alive and well, as nearly 4 out of every 10 women who say their cheating habit started when things became hot and heavy with a colleague or boss according to results released from a revealing new survey.

The survey, conducted by VictoriaMilan, asked 5127 of its active female members who it was that tempted them to cross the line of lust and have an affair for the very first time.

Office romances have been steaming up time sheets for decades – most famously the dalliance between former President Bill Clinton and White House intern, Monica Lewinsky. Pop culture has also been inspired by such affairs, referred to in the hit song ‘Yes Boss’ by Mikkel Hess, and cult classic film, ‘The Secretary’, starring James Spader.

A massive 38% of women – almost 4 out of every 10 – said their first adulterous adventure was with a colleague or boss at work, meaning the watertight old excuse of ‘I had to work late…’ now has some serious question marks hanging over it.

Anonymous flings are the second most popular option. 21% of women indulged in an online flirtation as their first act of extramarital lust, while 14% decided to hook up with a stranger while they were on a wild night out.

Keeping things between friends isn’t a favorite item on the menu – just 9% of women said they decided to blow off steam and have their first affair with a friend.

Friends, and the partners of friends are unlikely to get a front row ticket to the action as well, as only 8% would slip between the sheets with their partner’s friend and only 5% of women saying they had made a move on their friend’s partner.

Cleverly, women are unlikely to engage in a steamy love affair with someone close to the family home – just 2% of women said they threw caution to the wind and jumped into bed with a neighbour.

Founder and CEO of Victoria Milan, Sigurd Vedal said workplaces just became a lot more interesting, now that it’s been revealed that sex might be added to the daily agenda.

“Having an affair with a colleague or boss is an easy and very sexy option. Who hasn’t fantasized about having sex on their desk at work or in the conference room…?

Office relationships are easy because working overtime is a plausible excuse that is unlikely to be questioned. Women bond with the people they are spending long hours with and sharing the stress of daily work life. It’s a pseudo relationship – why not spice it up a bit?” Mr Vedal said.