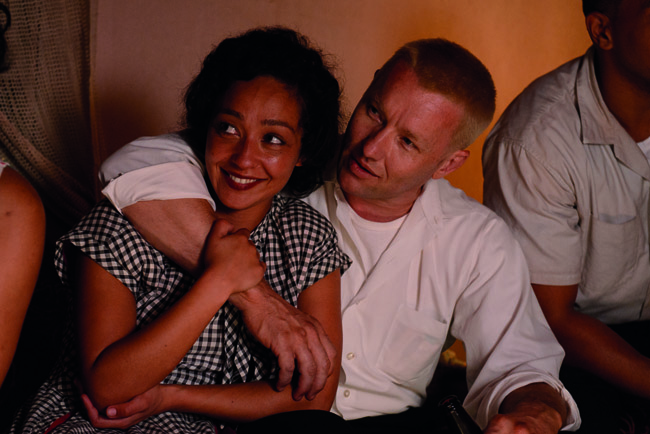 While Loving is part of the wave of the ‘true stories told on film’ trend we’ve seen lately, its sense of quiet and carefulness with every scene differentiates itself and makes for such a wholly understated film.

A lot of films, when taking this approach, cannot maintain an engaging and engrossing picture, so to see Jeff Nichols tell this story in such a way, and to such effect, is wonderfully received.

Loving tells the story of real-life couple Richard (Jeff Nichols), a reserved construction worker, and Mildred (Ruth Negga), his pregnant girlfriend whom he marries; a marriage for which they must travel from home state Virginia to Washington DC in order to make official. While planning their quiet life on an acre of land Richard bought for them, officers break into their home in the night and arrest them under anti-miscegenation laws. In order to be released, the couple must promise to leave Virginia and not return for 25 years. As they fight for their right to love each other, the couple challenge the laws against them doing so, which leads to a legal battle in the US Supreme Court.

Each element threads together delicately, never rushing the story, and always working in a way to spotlight the couple as characters and Negga and Edgerton’s performances. What is so great about these performances is that they are so far from the flashy, attention-stealing depictions seen in many dramas. The Lovings were real people and are real people in this film, not superheroes who seem to be better, more clever, or talented than those around them; they just love each other and want to legally be able to do so.

Despite the heavy use of silence over incessant dialogue, none of the scenes drag. The editing isn’t choppy but it keeps moving at an effective pace and doesn’t allow for faltering. The detail in the direction is exquisite and creates an enveloping sense of immersion in this world that really wasn’t that long ago in history.

Despite perhaps not having wide appeal, as the film doesn’t have the tension, thrill, or brashness sought by many, Loving’s handling of this important story casts a new lens on the dramatisation of true life.

Loving is out in cinemas February 3rd.