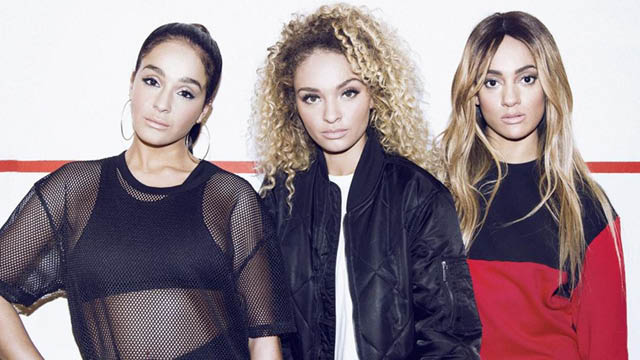 If you don’t know about M.O then where have you been hiding for the last few years?

M.O is a three-piece UK girl group made up of Frankee, Nadine and Annie who are about to blow the music business to pieces! Here’s everything you need to know about M.O… In late 2012 the M.O girls filmed their first A64 session for the online platform SBTV. Rather than coming with just a straight up boring cover, the girls decided to do a revamped remix of Brandy and Monica’s hugely successful RnB track “The Boy Is Mine”. With a little help and rap twist from Lady Leshurr, the video become SBTV’s most viewed debut A64 to date.

Since then the girls have gone on to release a number of warm-up tracks which all gained huge support from MistaJam and landed a place on his 1Xtra mainstream radio playlist. As MistaJam said so himself, this girl group is the only girl group that you need to worry about!

The three-piece has a huge 90’s RnB/Hip-Hop style influence with their baggy jeans, bomber jackets and Timberland boots. Not only is this shown in their fashion but it also reflects in their music. The 90’s is making a big come back and M.O is right on point! With their upbeat tracks, slick RnB vocals and lyrics that get stuck in your head they are simply a must for your iPod track list. In this day and age, it is very rare to come across a girl group where each member oozes talent. M.O have IT! With numerous acoustic videos released through the girls YouTube page, you can see and hear for yourself. The vocals coming from each member are sick and their harmonies are straight on the money. This group have only just started and are about to make a bang in the UK music scene. With a large fan base and Twitter support from the likes of Ed Sheeran, K.Koke and Little Mix, you really need to start paying attention to these girls.

2014 saw the girls drop their first two official singles, For A Minute and Dance On My Own, with both receiving huge praise and success from all media platforms and with the public. Their fan base has now increased massively and these girls show no signs of slowing down! This month sees the release of their third official single Preach, which is no doubt another successful track from these super talented women. With a little help from Joel Compass, who you may know from Cheryl Fernandez-Versini’s album Only Human, the girls have written and produced a banger with Preach. Grab Preach on iTunes now here – https://itun.es/gb/5YHI5

So what do you think? Here at Flavourmag we are huge fans of M.O and have rocked with the girls from the start! Will they be added to your iPod playlist?