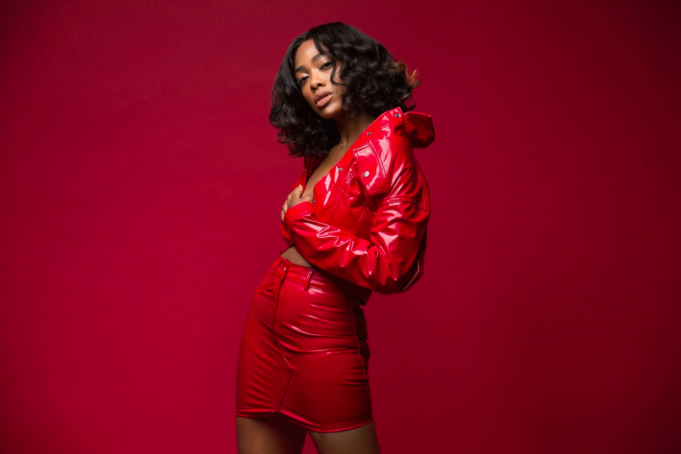 Premiered yesterday by both Billboard and Beats1. MAAD returns with new single ‘Wonderland’ and follows MAAD’s sold out performance at Selfridges, London alongside RAYE.

Hot on the heels of the release of her critically acclaimed debut EP ‘Le Funk’ earlier this year, NYC based artist/DJ/model MAAD returns with her hotly anticipated new single ‘Wonderland’.

Featuring a verse from Brooklyn native Jimi Tents, the pair showcase their undeniable chemistry and fuse both of their sounds on the track, which is lifted from MAAD’s forthcoming EP release.

Produced by Lostboy (Anne-Marie, Becky Hill) and co-written with Hannah Yadi (Frank Gamble, Felix Snow), ‘Wonderland’ is an electronic synth-pop banger and follows MAAD’s previous releases, which has earned her fans in influential tastemakers such as Ebro Darden (Beats 1 and Hot 97), The Line of Best Fit, Saint Heron, NOTION and more.

Having spent recent years modeling for top publications and brands such as ELLE, L’Oreal, Seventeen and Anastasia Beverley Hills, along with working with the likes of GRADES (Dua Lipa, NAO), Bizness Boi (PartyNextDoor, 6LACK), TheVAMP (Ne-Yo) and The Stereotypes (Bruno Mars, Justin Bieber), and collaborating with internationally renowned rap artist A$AP Ferg, MAAD has firmly set her sights on the spotlight with her blossoming solo career – and with outlets from Noisey, Earmilk and The 405 to Wonderland, Essence and MTV already tipping her for big things she is set to truly shine in the lane she is confidently marking out for herself.