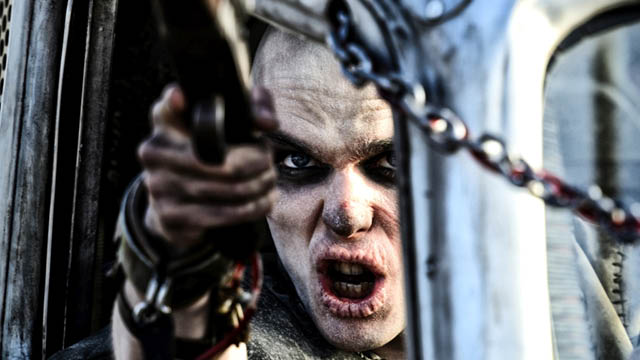 Talking on his character Nux, working with Tom Hardy and some of the crazy stunts he had to take on in the film, Nicholas Hoult is our man of the moment. Let’s see what he had to say.

Tell me a little bit about Nux and how you see his journey in the film?

NICHOLAS HOULT:  Yeah, okay.  Nux is a War Boy who is essentially one of the characters who works for the Immortan Joe.  They have been brought up since they were young, working as War Pups and working with vehicles and stuff as mechanics.  And Nux is fortunate in that he’s worked up through those ranks to become a driver, which is kind of the most esteemed position you can get to.  And then he’s managed to become the driver of the fastest pursuit vehicle, so he’s doing pretty well.

Unfortunately, [laughs] he’s not too healthy when we first meet him.  He’s got his lumps and bumps, a bunch of tumors called Larry and Barry, which are kind of chewing away at his windpipe.  And he’s kind of on his last legs.  It’s pretty much all over for him.  But then, essentially, once he hears Furiosa, Charlize [Theron]’s character, has escaped from the Citadel with the Immortan’s five wives, he’s, like, ‘Okay, this is a chance for me to go out in glory.’  Because these War Boys basically grow up believing that if they die in battle, in a brilliant way, they’ll be witnessed and go to Valhalla and be remembered amongst the warriors of all time.  So it’s a good opportunity for him. What was it like to work with director George Miller, and your impressions of him after going on this journey with him to make this movie?

NICHOLAS HOULT:  George is just one of the smartest, kindest people I’ve ever known.  He really is.  When you listen to him talk, he starts off at point A and he goes through every other letter in the alphabet to get to point B.  But along that, you learn so much.  He’ll go off into a story about when he was a doctor, or when he was talking to this person, he learnt that.  He’s such a bank of knowledge.

And even during the audition for this, it was this four-hour process thing.  I remember then walking out with him thinking, like, no matter if I get this wrong, the experience I had in that room by lunch, how much we talked, was enough.  To then be on set with him every day and see how he handled such a huge production—to be in the middle of this huge storm, essentially—but still managed to always be a gentleman and calm and collected and pure of thought was amazing.

He can see every character’s journey.  And he will come to you before a take and be, like, ‘Okay, this is where we’ve been up to this point.  You did this and this.  And don’t forget that.’  And he just has just the sweetest way with people.  But then he’s also a mastermind where he comes up with crazy worlds like this and Babe and Happy Feet.  And you’re, like, ‘What’s going on in your brain?’  It’s remarkable. What was it like for you to walk on the set and drive the cars and just experience this immersive world around you?

NICHOLAS HOULT:  When you first see it, you can’t even begin to describe the vehicles they built and the thrill of it when you’re sitting in amongst them and you hear all these massive engines roaring around.  And you’re flying through the desert.  And there are hundreds of War Boys all dressed up acting with the gun.  They’re all hyped.  And you’re in amongst it.  And then you’re in this beautiful landscape in Namibia where you’re just kind of doing weird, crazy stuff.  It’s easy to get carried away with it.  [Laughs]

Tell me about working with Charlize and Tom Hardy, who is reinventing Mad Max in this film?

NICHOLAS HOULT:  It’s fortunate for any actor, I think, to work with people who are so talented, that you look up to.  Charlize has such a strong character and is so smart in all the choices she makes on set.  But she’s also fun.  She’s foul-mouthed.  [Laughs].  And you can crack jokes, and she’ll crack back.  And then suddenly, she’ll just switch it on.  And you’ll go, like, ‘Whoa, hang on, okay?  We’re in a scene and you’re smashing it.  This is amazing.’

And here I’ve got this and then another film thereafter with her, and it’s just amazing to see how she transforms into each character, and how she is on set to bounce off and work with.  She’s also not selfish in scenes, not always thinking about herself, but thinking about the film and everyone else who is in the scene.  So that was a treat.

And then Tom is, I think, one of the most watchable actors around.  I mean, you’re never quite sure what he’s going to do when you’re watching him.  I think that’s what makes it so exciting to see him on screen.  And it’s the same when you’re doing scenes with him where he’ll talk it through.  And he’ll get this look in his eye when you’re rehearsing.  You can see him calculating everything to figure everything out.  And then an idea will come to mind.  And then this and then that.  And then it kind of all forms around it.  And then suddenly, you’re in it.  And then he’s bouncing off that, doing something different.  And you’re, like, ‘Okay, this is cool, right?’  And he’ll be, like, ‘That’s going to be great!’  [Laughs].  Yeah, I can’t describe it.  But they’re both fascinating to watch work.  And, yeah, they’re cool.

You did some intense training with military guys for this role, and you wear crazy makeup.  Can you talk about those aspects of playing this character?

NICHOLAS HOULT:  Yeah.  The training.  Well, George got in touch a little bit before the film.  ‘Your character is meant to be dying, so you’re unwell, but there’s also not much food.’  So, training physically was also good training for that.

You’ve mentioned that you had two hours of makeup and Charlize just came in and smeared some black grease over her eyes, is that right?

NICHOLAS HOULT:  Charlize mooches in an hour-forty-five later.  Just rolled out of bed.  Got your greasepaint.  ‘All right.  Lovely.  Let’s go to set.’  And I’m, like, ‘Oh, man.’  That’s when you can tell the pros.  I keep on falling for it—long makeup.  I’m sitting down each time, like, ‘When will I learn that when they say there’s a lot of makeup, I need to figure that out.’ Can you talk about some of the crazy action you saw while you were filming this movie, and was there ever a moment that was particularly intense or just took your breath away?

NICHOLAS HOULT:  One of the main things I remember is just this huge truck, which is chasing me at one point.  I’m standing at the back of the War Rig, which is what Charlize is driving.  So I’m just poured at the back of that, and the camera’s up there with me.  And then there’s this long shot where this truck is chasing us.  It does this massive jump and then hits against this kind of cliff face, and I flip back in a somersault.  And then the camera pulls back, and you see kind of me watching it.  So George is there, like, ‘Okay, Nicholas, this is a big stunt.  We’ve probably only got one take of this.  Don’t screw up.’  And I’m, like, ‘Okay.’

And you’re there and you’re watching the stunt guys, all the drivers, getting prepped.  Because it’s completely against instinct to drive a truck into a wall.  That’s not safe and not logical for your brain.  So, everyone’s getting set up and you do a practice run.

And then it’s that weird feeling where you feel as though you’re a sportsman, and this is your final play to throw a touchdown, your Hail Mary.  This is it.  You’ve got to hit it.  And then you’re watching, you’re watching… And you’re, like, ‘Okay, this is the take.  We’re rolling.’  You see the truck coming.  You see it flip.  And it’s action.  And you’re, like, [gasps].  And you’re also just in awe of what’s going on around you.  And they have tiny little cameras in amongst us all.  It was just remarkable.  Sometimes when I was driving my vehicle, you couldn’t hear a thing.  You’d just be driving along, and then you’d see them just cruise up alongside you with the camera right outside your door.

Can you talk about the story and what resonated with you in terms of some of the themes in the film?

NICHOLAS HOULT:  I guess it’s just that hope and survival thing, that human instinct and spirit.  Because this is a mad world they’re living in, but they’re still compassionate and in love.  These characters are in life or death situations, but still kind of band together and make the best out of that situation.  I like doing that.

One last question:  how awesome is this film on a scale of one to—

NICHOLAS HOULT:  Ten.  Whatever the scale is, it’s a ten.