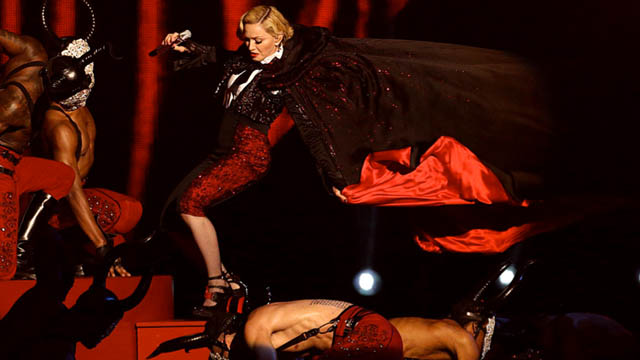 Remember when Beyonce fell down the stairs on stage in 2007 because she was wearing a cape and stiletto monster heels? Well, the same thing just happened to Madonna at the BRITS last week.

What else did they both have in common?

They both got straight back up and finished the show flawlessly.

However, when Beyonce fell in 2007 no one was remarking that she should maybe take a step back and accept that she’s just too old for hopping around on stage in fabulous costumes.

Sadly though, we live in a society where a lot of the reactions to Madonna’s fall were attributed to her age. Why is it that when women reach a certain age they’re suddenly supposed to put their clothes back on and calm the hell down?

Madonna certainly wasn’t happy about it as she recently spoke out, saying:

“It’s still the one area where you can totally discriminate against somebody and talk shit. Because of their age. Only females, though. Not males. So in that respect, we still live in a very sexist society.”

She also got some support by J.K Rowling who had some wise words to share