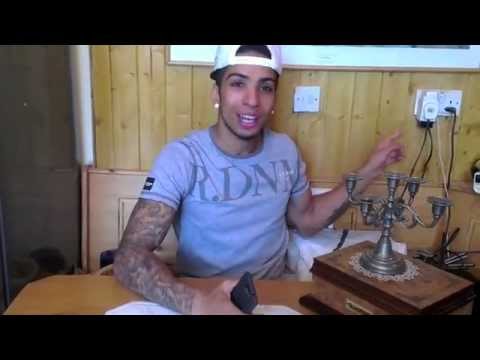 Von Majik is a young magician who begun at the early age of 12, being inspired by watching David Blaine on TV. He begun to watch his shows over and over again, studying and learning his techniques. Seeing his son’s potential, his dad joined him up to the Magic Circles Youth Initiative, where his skill developed. Before the age of 18, he had already won two awards, and had begun to get booking for events and TV work. Now he is working on a TV pilot for his own show, and has attracted many brands and celebrities. You first developed a taste for magic at the age of 12 with David Blaine being your inspiration. What was the initial fascination with it for you?

When you see magic for the first time, its just like wow, I’ve never seen anything like that before. I’d maybe seen Paul Daniels and big stage stuff on TV, but you think its camera tricks or something. Him doing it on the street and seeing people’s reaction was like wow, and being a spectator myself on the screen was amazing. I took the extra step to learn how to do it, by watching his tape over and over again. My dad hooked me up with a magic club that was in London called the ‘Magic Circle’, I just thought it was amazing and wanted to do the same thing.

When you were studying and learning his techniques, did it come naturally to you, or was it hard, and what was your favourite trick that you first learnt?

My favourite trick was called ‘The rising card’’, David Blaine actually did it on his show; it was my favourite trick out of the whole series. Someone chooses a card, they sign it and he puts it back in the box, and gives the box back to the person to hold. He says just think about your card, the person holds the box, and as their thinking about their card it rises out of the pack. Their reactions are mad, like they’ve seen someone get killed. When you watch magic over and over again, you know what to look for after a while. I guess it came naturally, because I’m still doing it now. You have to be really patient, sometimes you wont get stuff straight away.

How did your parents help and encourage you to make a hobby into a career?

My dad purchased a lot of the effects, because magic is a big market to buy stuff to teach things to each other. The more advanced you get you can come up with your own stuff. My dad and my stepdad brought me a lot of magic, my mum was like ‘what’s all this nonsense your doing, you need to get a real job’. I just kept doing what I wanted to do.

How did being in the Magic Circles youth initiative develop and enhance your skills?

Magic’s all about presentation so without presentation the magic’s not really effective, that goes for 90% of what you do. They taught a lot about presentation to make the magic your own, don’t do stuff that doesn’t look right, do stuff that suits you. I wouldn’t be like pulling rabbits out of hats because it’s not my style; I do something that’s organic to me and true to me. Originality, and just to practice performing, because that’s the only way your going to get better.

At the age of 15 you won the ‘Young Close-Up Magician of the Year’ after only 3 years from starting to learn magic, which seems a very short time! How focused were you on magic at this time, and did it ever interfere with your school and social life?

When I was young I didn’t have much of a social life really. I met my friends at school, so when I got home that was my time to do my homework and watch TV. I’d just be at home doing magic, and it didn’t feel like I was losing out, because it was something that I enjoyed. I would practice for hours. I would get home at 4pm, and then before I knew it, it was 9, I’d just be doing it for hours.

Which of your magic tricks are of your own creation and totally unique to you?

All my presentations are unique to me, with magic it’s hard to come up with something that hasn’t been released already. You can buy magic as a magician, but you can apply it to things that you already do. One effect that I can say is mine, but the method isn’t mine, but the whole trick itself is pretty much mine, is when I have a coin inside a card.

A lot of your magic relies on misdirection but your skill and manual dexterity is also a huge part. How have you trained your dexterity to the level you have right now?

I think the dexterity comes with time. Once you have practiced anything over and over again it just becomes second nature. Sometimes I might present something in one way, and it might not go as well if I did it the other way, so I’ll do it the other way and tweak that. Everything’s just experimenting, but the dexterity will always be there, I could not touch any sort of magic for a year, come back to it and it will still be the same.

Which trick of yours has stunned or freaked someone out the most, and can you remember a particular time?

I’ve had people screaming, I’ve had one person kiss me. I was just doing a routine in Covent Garden for a few people, I just changed an object in this women’s hand, she didn’t know what to do so she ran up to me and kissed me on the cheek. Everyone reactions are different, recently I did a wedding and this guy was silent then said ‘mate that was the most amazing thing’. Some people don’t react at all, they’re dead serious.

Have you ever messed up a trick before and how did you salvage it?

Which celebrities have you enjoyed performing for the most and why?

James Corden is really nice, I was doing this charity dinner and he was like ‘yeah show me some magic’. I showed him a little thing and he was like ‘Wow that’s amazing’. It makes you feel good a celebrity saying your good. Recently I did Marvin and his family from JLS, at this restaurant, and it was Father’s Day. David Haye was pretty cool as well. I did a show with Tinchy Stryder that came out on ITV2, he’s really cool and down to earth, and I taught him magic for the show. I taught him how to get out of a straight jacket and a few card effects.

What’s the best event or place you have performed at?

HTC Party that was good. I did a gig for Louis Vuitton and the setting was just like WOW, they went all out. I did Lovebox music festival a few years ago that was really good.

Where do you see your magic taking you?

As far as it can. With this TV thing that I’m doing, I was performing at the restaurant where I met Marvin and the person I met was the CEO of Zig Zag productions and he was like ‘yeah your really good’. Because of the success of Dynamo, magic’s more popular on TV now, so they wanted a different image, but the quality of magic to be the same still, and they really liked me. Were taking it further everyday, the sky’s the limit with it.

Von Majik is currently using the HTC One X to capture his journey as an Urban Magician. Follow his journey at #MyHTCUrbanAdventure