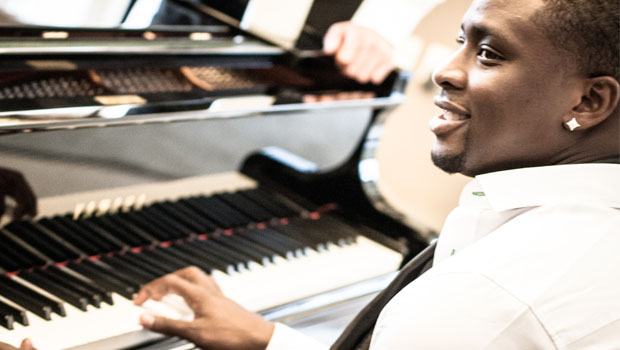 Harmony “H-Money” Samuels is a talented music producer who has worked with UK artists such as Chipmunk, JLS and Alesha Dixon. He moved from London to L.A to join the Darkchild label in 2008 alongside Rodney “Darkchild” Jenkins.

Harmony has since started his own label BOE and worked with US artists including Chris Brown, Jennifer Hudson, Kelly Rowland, Michelle Williams and Ne-Yo. We catch up with Harmony to talk about the direction of music and life in the fast lane.

When did your love of music begin? At four-years-old but, my mother claims it was from when I was in the womb because whenever she played music I would kick!

Who were your music idols growing up? Quincy Jones, Micheal Jackson and Whitney Houston. Also being from London, Oasis and Blur were big influences for me.

How did you get your big break? I was actually at the end of my tether and my big break kind of happened by fate. I was in L.A and some dude had heard my music and spent the whole day looking for me, his name was Rodney “Darkchild” Jenkins. He wanted me to move over and work with him. The music industry in the UK was so hard, I was about to give up and start teaching Music at my old school, then this happened and I moved to L.A. Where are you in the world right now? L.A at a conference.

Which artists are you working with at the moment? I just finished Fantasia’s album, we crafted a great album. She’s talking about her life and she wants to help women who have faced heartache. I really loved working with her. I have also just finished working on a gospel album for Michelle Williams.

Who would you say is hot right now? Sevyn Streeter who has just been signed by Chris Brown. She has a new single called ‘I Like It’ and I’m excited about her.

You’re based in L.A, how often do you come back to the UK? Hardly ever, maybe once a year.

Do you prefer British or American music? British. I’ll tell you why I prefer British because Britain is a musical place. British music is about so many different people because it’s such a multi-cultural place. In London it’s very open, whereas in America if your urban music, your urban if your pop your pop etc. Tiny Temper could do a record with Coldplay, then a bunch of people from the hood and it wouldn’t look weird to us, that’s what I love and miss England for.

Which artists have you gone on tour with? Back in the day I used to play the keyboards for Mis-Teeq on tour! Right now I’m about to go on tour with Fantasia, I’ve toured with Chris Brown – he’s a good friend of mine and I’ve been on the road with Ne-Yo.

What do you think makes the way you produce different to anyone else? I think just being from England and living in America I sound different from everybody else. England makes up its own music, I mean we made up Grime and coming from a place that can do that, your music always sounds different no matter what they ask you to do.

Which direction do you see music heading next? I believe it’s going to come back to RnB. Although dance is still going to be evident, I think there might be more RnB, like the late 90s’ I think it’s going to go back there. As long as you write a good song and world likes it, it will do well.

Describe a typical day for Harmony. 6.30-7am start, meditation, then straight to the gym. From the gym to the office at about 10am, then start work with staff meetings, then by 1pm the client is in. It might be Chris Brown, it might be Sevyn or it might be Jennifer Hudson. Sometimes I might have Keyshia Cole in one room and Ne-Yo in another room, it’s crazy. My days can be hectic, but its fun, I have a small staff of 8 people working with me and its great.

Are you living the dream? Partially! Sometimes it’s not as easy as it looks, but the benefits are great too. Watching millions of people love your music and watching artists become superstars because of your music. But, it’s also very hard work, I work 7 days a week.

What would you say to someone starting out? Never give up, if you believe you’re gifted and talented never give up. Secondly, don’t allow any country or industry to stop you the world is a big place. I didn’t allow the industry in London to stop me, I moved to another place and it worked out. Open yourself up and go other places.

What’s next for you? Getting these albums out and making sure they do well. Also, working on a few TV shows and we’ve got a new artist, who is like a modern day Brandy. I’m excited about Chipmunk’s new album that I’m going to be working on and just coming home and building on our empire. It’s going to be an exciting year!

Here is ‘Champion’ by Chipmunk feat. Chris Brown a collaboration brought together by Harmony.