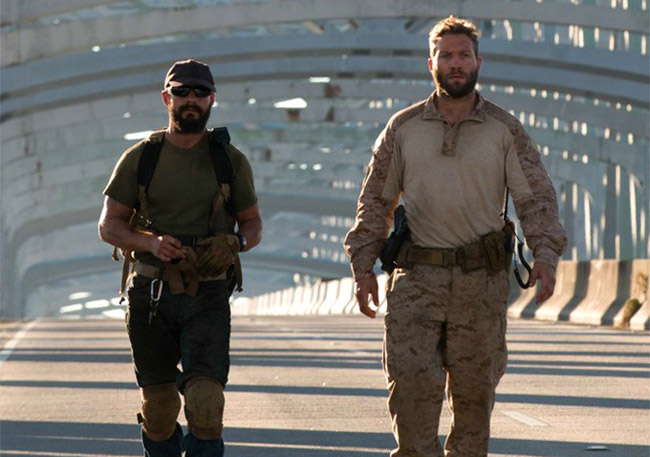 Headache inducing doesn’t give the right amount of credence to the complete and utter mess of Man Down.

Man Down is a confusion infused collaboration between a leading man whose involvement seems unfathomably odd and a director whose direction seems to wander aimlessly looking for his purpose.

With no coherent flow, Man Down follows Gabriel Drummer (Shia LaBeouf), a US Marine flanked in the horrors of war, severely affected and suffering from a mentally dilapidating form of PTSD, across four different timelines. In one, before Gabriel is sent off to Afghanistan to do his duty for his country we see him as a proud family man deeply in love with his wife and doting on his son. Another places him in the heart of the war zone amongst his fellow marines witnessing and dealing with the riskily murderous patrols which are the cause of his PTSD. A third places him in the office of a military psychiatrist, played by Gary Oldman, in a verbal combat of conversation as the psychiatrist tries to unravel Gabriel’s state of mind after his tour of duty has his best friend murdered before his very eyes. In the final and most promising timeline, Gabriel’s donning a heavyset beard, personality and appearance of the man he once was vanished into the ether.  In what appears to be a dystopian world, Gabriel roams the streets searching for his kidnapped son.

Enter the confusion, each of these timelines are intermingled, yo-yo back and forth between each time from the very outset in no particular order, but the flow and form is far from pretty with long drawn out sequences of pure mind-numbing monotony with only glimpses of light peeking through the grey drudgery of mud the audience is expected to wade through. It’s one thing to be creative in your juxtaposition which director, Dito Montiel, has clearly tried to be here but it’s another when it comprehensively hinders the plot of the story you’re trying to tell.

For a talent such as LeBeouf the appeal of this story speaks volumes but not even his abilities lends a hand in miraculously turning things around, even with a surprising twist of the tale that unfolds in its closing stages can make up for the hap-hazard drudge and familiarity with have been loosely stolen from similar films can save this self-indulgent project.

Whilst it’s commendable that Montiel has tried to tackle the issue of PTSD suffered from those who have fought on the frontlines and then left completely abandoned by those who sent these man off to war but unfortunately the way in which this story has been moulded does them no justice.

Man Down is released on March 31st.