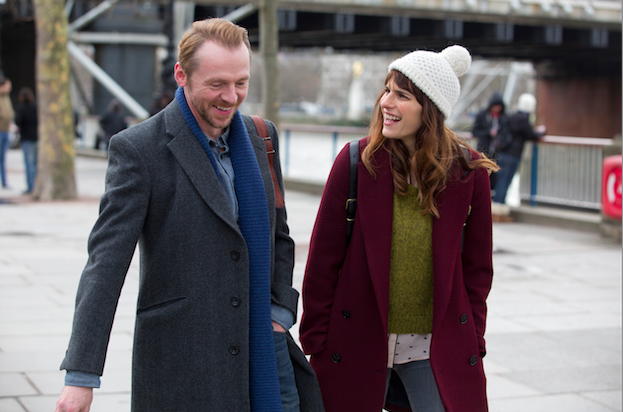 Simon Pegg is back, and for once we get to see him in a romantic comedy and playing a fairly sensible character with a bit of an emotional side full of insecurities and a bit of a romantic side.

Nancy (Lake Bell) is a feisty 34 single women fed up with constantly being set up on dates with unsuitable men who she has absolutely nothing in common with by her friends. One to never take a risk she decides to step out of her comfort zone as she travels to her parents to celebrate yet another year of their blissful marriage. Enter 40 year old, freshly divorced Jack (Simon Pegg), who mistakenly thinks he is her 24 year old blind date. Nancy, very much unlike her, decides to just go for it and plays along. What follows, is one night of copious amounts of alcohol, home truths and an unconventional story of falling in love.

What we have been missing for a while now is a good old British romantic comedy; The Brit’s are good at producing these films so why we haven’t seen much of these of late is beyond me. What we have in Man Up is a more sassy and feisty version of our beloved Bridget Jones.

The title may be a little misleading as this is very much focused on a woman who, after hitting her 30’s is a bit more realistic about love and so much more sceptical and quite frankly sick and tired of meeting the wrong man. While she comes across as this confident, no nonsense “takes everything with a pinch of salt” female deep down, what she really wants is to just be loved by someone (a bit like most of us single 30 something females).

Now don’t get it wrong this is not your typical chick flick with nothing but sickly sweet girly moments, it’s full of laugh out loud moments that a lot of us, men and woman combined, can relate to. One scene in particular that stands out is where they are in a bar, of which used to be Jack and his ex-wife’s most frequented spot, when said ex-wife shows up with her new man in tow. Jack is crushed but Nancy lays it on thick for her date in order to make his ex jealous leading to lots of over exaggerated touching and talk about their “sex life”.

Lake Bell, considering being American playing a Brit, stands out and steals the limelight right from underneath Pegg. She plays the disenchanted singleton so well, building up a rapport with the audience to the point where you feel yourself rooting for her even if she started off the date on a lie of who she really is. Simon Pegg is Simon Pegg but at least this time his character is a bit more mature and vulnerable than we are used to seeing and thankfully he pulls it off and makes his character really likable.

Man Up is your feel good, hilariously funny romantic comedy, with a slightly dodgy ending,  which will make you come out the cinema thinking thank god you’re not the only one that (if still single) goes through this situation and that there just might be hope.

-The Seven beats of Man Up Featurette