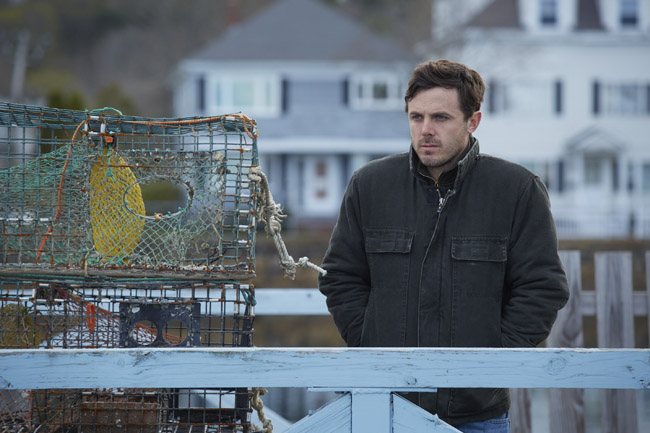 Kenneth Lonergan returns to the director’s chair with Manchester by the Sea, bringing with him an all too familiar sense of profundity regarding the human condition.

Lonergan’s previous films, You Can Count On Me and Margaret have philosophised as well as debated over similar themes, normally accompanied by a myriad melancholy. He is a keen observer of the absurdity of life and the rituals that coexist with social interaction. But whether it was due to studio interference or the fact that his prior movies were merely a blueprint for the ideas that would be perfected in Manchester by the Sea, Lonergan has now created a masterpiece of such immense magnitude that it will be almost next to impossible for any Hollywood executives to interfere with his artistic direction in the future.

Manchester by the Sea follows blue collar worker Lee Chandler (Casey Affleck) living a hollow, thankless life in Boston. Working as a handyman his life also functions on a purely operative level, merely existing instead of living. An unexpected event forces him to return to his hometown and acts as a catalyst for Lee to deal with the inner demons that have plagued him. Casey Affleck finally reaches his true potential as an actor playing a character that is as much an enigma to himself as he is the audience. He plays the character with such a physically nuanced performance that it perfectly encapsulates the impenetrable repressed wall of emotion that a man like Lee can’t articulate with words.

In many ways, this film is the anti-melodramatic weepy prestige picture, far from the mawkish emotional manipulation we get from those movies. The pathos we get in Manchester by the Sea comes from the pain that Lee will never be able to verbalise. He is a hardened shell put together by layers of his own inner turmoil that sometimes reveals itself in the form of violence and, on rare occasions, sobbing. It is a powerful depiction that, ironically, for a movie about the repression of feelings had me trying not to cry in the cinema multiple times.

Although Manchester by the Sea is primarily a character study, it also takes time to examine these issues in a much more encompassing manner, in particular through male bonding. How we often balance moments of terrible grief with a humorous reflection. Much of the film’s harrowing moments are often followed by moments of comedy that although might seem inappropriate in actuality truly reflect the nonsensical nature of existence in its duality. The difference between how men and woman handle emotions and interact is also explored in a subtly fascinating ways.

A supporting cast that includes the likes of Kyle Chandler, Gretchen Mol and Lucas Hedges all add considerable depth to the movie’s credentials as well. But it is Michelle Williams showcasing what has to be, at this stage, consistently regular performances in the master class of acting that stands out the most besides Affleck. Her character’s story arc resonates arguably as much as his and is certainly more satisfying.

Manchester by the Sea – I am sure as time goes on – will be looked upon as one of the seminal works of the 21st century. It is beautifully written and superbly acted but what will become truly timeless about it is its stirring representation of the divide between what we feel and what we are able to express through communication.

Manchester By The Sea is in cinemas January 13th