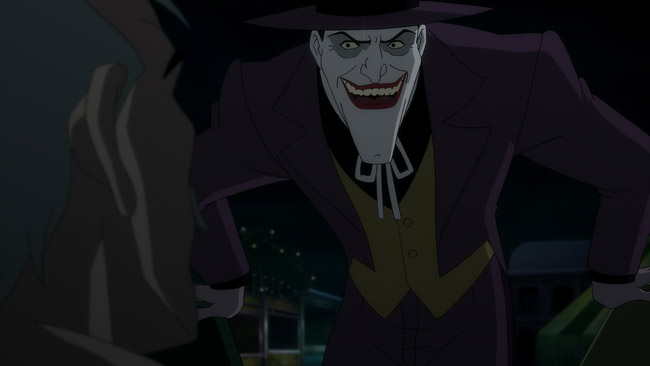 Batman’s most notorious nemesis, The Joker, has been around for 76 years since his creation by DC Comics in 1940 – and so, it is nothing new that the conspicuous character in question has gone through some pretty drastic makeovers.

From Ledger to Lego, we take a look at the many incarnations of the Joker to celebrate the release of Batman: The Killing Joke on Blu-ray™ and DVD on August 8th.

The original Joker, created by Bob Kane and inspired by a picture of the actor Conrad Veidt in the silent film “The Man Who Laughs,” combined the authentic look of a joker playing card and the actor’s obvious pale face and eerie grin. The character was a ruthless killer, who would have been killed off himself if it wasn’t for Jack Schiff’s take on the Joker who was softening in persona, by the end of the 50’s. The Joker took upon a role of a thief and became much less brutal. When Editor Julius Schwartz took over in 1964, the character almost died out altogether. Romero’s appearance as the Joker did not differ much from his comic book incarnation at the time, with one strange and rather baffling exception: Romero refused to shave his moustache for the role. So in each of his eighteen featured episodes, the Joker’s white face paint was applied directly over Romero’s ridiculous facial hair. In 1973, Neal Adams aided The Joker into a new and dark age. In Burton’s 1989 film, the legendary actor Jack Nicholson stepped into the role of Batman’s archenemy, donning the Joker’s trademark purple suit, green hair and iconic grin. Nicholson’s performance and appearance in the film brought the destructive hints of Brian Bolland’s take on the Joker to life. After Burton’s success, it wasn’t long until the Joker was set to hit the screens once again, in Batman: The Animated Series ’92. Bruce Timm borrowed the dark, gothic look of Tim Burton’s films and took them to even, more extremes, redesigning the Joker’s look to fit the streamlined style of their animated series. Voiced by Mark Hamill, this animated take on the Joker featured a square jaw and long pointy nose, far more in line with the character’s original appearances in the 1940’s. Come 2008 and it was Christopher Nolan’s turn to twist the character of the Joker into something of a more realistic approach. Ledger’s Joker had a look fitting of a homicidal maniac, with a grin that’s literally cut into his face in jagged scars. This Joker’s pale skin also appears to be the result of makeup and not acid scarring, as is the case with all other iterations of the character. And finally, Mark Hamill returns in the much anticipated 2016 release of Batman: The Killing Joke, it’s a must see. How else will you find out what the Joker has morphed into next? BATMAN: THE KILLING JOKE IS OUT BLU-RAY AND DVD MONDAY AUGUST 8th